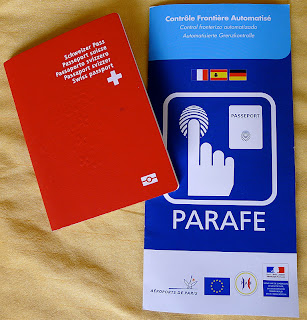 It's true - I love my Swiss passport. If this seems like a strange thing to say after spending two wonderful weeks in the United States, it's because my Swiss passport does something that my American passport can't do. If you think that I'm being disloyal to my American heritage or that I'm still fuming about the $300 that I had to pay after the Massachusetts State Police impounded our car, let me ask you something.

After being encapsulated for hours in a plane, would you rather stand in this line for immigration at Charles de Gaulle airport in Paris:

or in this line? 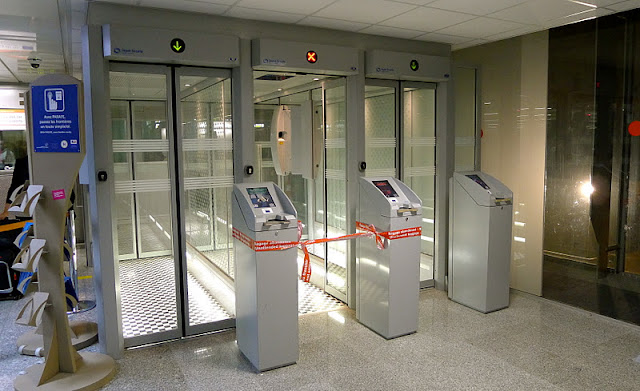 If you picked the non-existant line, then you should apply for a Swiss passport. Plus, it comes with a free lifetime supply of chocolate and cheese (joking!).
But if red and white aren't your favorite colors, a citizen with a passport from any country in the European Union or European Economic Area is eligible for "Automated Fast Track Border Crossing (PARAFE, in French). After registering your passport and fingerprints with the immigration office at Charles de Gaulle or Orly, a process which takes about 5 minutes, here's how it works:
It's easy, it's free and best of all you skip the long lines waiting to pass immigration, both outbound and inbound.
You'll save so much time that you won't mind sitting in rush hour traffic with a talkative taxi driver for more than an hour (again, joking!). What was on my taxi driver's mind? Dominique Strauss-Kahn (DSK), who is once again facing another sex scandal, Francois Hollande, who seems to be the favorite to win the presidential election in France, and all of the other drivers on the road who apparently don't know how to drive.
Labels: Automated Face Track Border Crossing Charles de Gaulle insider's tip Orly PARAFE