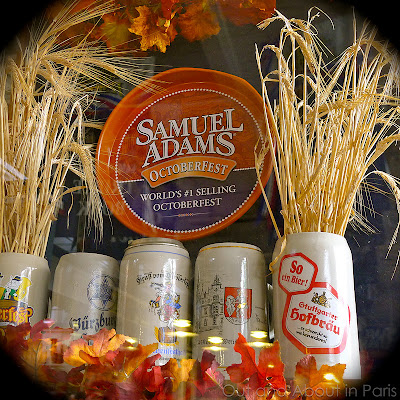 If you're an expat living in a foreign land, it helps to be adaptable - kind of like a chameleon that changes color to blend in with its environment. So, while I may have mentioned enjoying a glass or two of wine in Paris, I also have wonderful memories of linking arms with friendly Bavarians, swaying to Oom-Pah-Pah music and downing my fair share of wheat beer at the Oktoberfest in Munich. Without fail, our German friends always declared that their beer tasted better than American beer because of the "German Beer Purity Law" stipulating that only water, hops and barley could be used during the brewing process. Yeast was later added to the list of legal ingredients.

When our tour of the Samuel Adams Brewery in Boston began with an explanation of this ancient German law, I knew that we were in good hands. Their "brew crew" understand beer and brew it the way that it's meant to be brewed. They've just added a bit of American innovation.

After offering us samples of pale and chocolate malted barley, our guide explained that there are two main branches of the "Beer family": ales and lagers.

Knowing that everyone was already thinking about the free beer at the end of the tour, our guide gave us a short and informative description of the brewing process before escorting us to our final destination, the tasting room!
Even though the group looks a bit serious in the photo, the mood in the room quickly changed once we got to the most enjoyable part of the tour: pouring and tasting three different kinds of beer - Boston Lager, Octoberfest and Boston Brick Lager. With a deep red color and a pleasing caramel flavor, Boston Brick was my favorite. And best of all, for every pint and keg that is a sold, a donation is made to "Brewing the American Dream", a fund that helps small business owners in the Boston area.
Cost of the tour: absolutely free, although guests are invited to make a $2 donation to charities supported by Samuel Adams. It's best to arrive early because the line gets pretty long after all of the college students roll out of bed and make their way to the brewery in the afternoon! Be sure to bring a valid ID.
Samuel Adams Brewery
30 Germania Street
Boston, MA 02130
Labels: Boston out of Paris