Happy Halloween. Trick or treating at the Garment District in Boston!


When our children were younger, they would start planning their Halloween costumes weeks in advance. Sara usually wanted to be something pretty, like a princess or a ballerina, while Philippe always wanted to be something scary - like the year that he insisted on being a lime green ghost even after I explained that ghosts are almost always white. Upon hearing that they were going shopping together for their Halloween costumes at The Garment District last year, I imaged the two of them trying on masks and giggling like a pair of co-conspirators.

But since it didn't seem fair that they should have all of the fun, I decided to visit The Garment District while I was in Boston at the beginning of October after being reminded of it in a post written by Penny at Boston Zest. (If you're a resident of Boston or planning a trip to the city, be sure to take a look at this website because it's full of useful information)


With over 40,000 pieces of vintage and contemporary clothing organized by decade and style, Sara and I were like a couple of kids in a candy store...or in a costume shop. Laughing as we tried on monster masks and capes, we caused quite a scene.

Am I on the left or the right? I'll give you a hint - which one of these two characters would have been "out and about" in Paris during an earlier time? As soon as I started waving my swashbuckling sword over my head and fighting a fierce duel with an imaginary opponent, one of the stores security guards decide that he better keep a close eye on us. With my knack for getting into character, it's a good thing that I didn't follow Sara's suggestion to try on a French Can-can costume with these sparkling shoes. Red glitter would have flown all over the place as I did high kicks and danced like a performer at the  Moulin Rouge while the guard escorted us out the door.
Happy Halloween, everyone! What's your "trick or treat" for the day?
The Garment District
200 Broadway
Cambridge, MA 02139 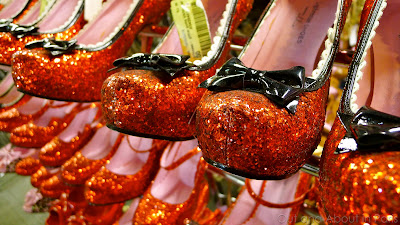