Harvard or hot chocolate at L.A Burdick's in Cambridge?


While still snuggled under the blankets in bed this morning, I thought that I would either do a blog post about the historical tour of Harvard or about the hot chocolate at L.A. Burdick's in Cambridge. But after getting out of bed - brrr-it's chilly here in Boston! - I decided to write about something chocolaty, rich, indulgent and steamy, if for no other reason than I wish that I was sipping a cup of Burdick's famous hot chocolate right now. The post about Harvard is going to have to wait...

Stepping into Burdick's Chocolate Shop and Cafe felt oddly familiar, so I wasn't too surprised when the shop assistant told me that the chocolatier, Larry Burdick, had trained in Switzerland and in France.   That's why the dainty little delicacies that are known to francophiles as "macarons" are also called "Luxembourgers", which is the Swiss name for them, at Burdick's. He's paying homage to both countries and as a Swiss by marriage, I like it!

Burdick's wide assortment of artisan chocolates are shaped by hand and include such tempting bonbons as a traditional Cognac truffle made from dark Grenadian chocolate and more innovative ones like the Trinidad, which is a baton of dark ganache with cinnamon, cardamom and chopped hazelnuts. When the assistant learned that it was my first visit to Burdick's, he offered me a sample. Confronted by all of the tempting varieties, I finally settled on a dainty Poire Baton that was a little bite of perfection.

Another nod to Larry Burdick's training in Switzerland are the adorable little chocolate mice with colorful silk tails. When I mentioned how cute they were, the assistant told me that Larry learned to make them at a chocolate shop in Bern, where the thrifty Swiss chocolatier shaped the re-cooked and re-worked chocolate into the form of a mouse and sold it as a less-expensive chocolate confection for children. The tails were originally made from the knitting scraps of one of the retired owners who lived above the shop and glued on with chocolate. Having a Swiss husband, I can attest that they aren't inclined to throw something away if they can find a practical use for it! Of course, Larry's chocolate mice are freshly made with the world's finest chocolate.

Please visit the L.A. Burdick website for their locations in New York City, Boston and their flagship cafe in Walpole, N.H. 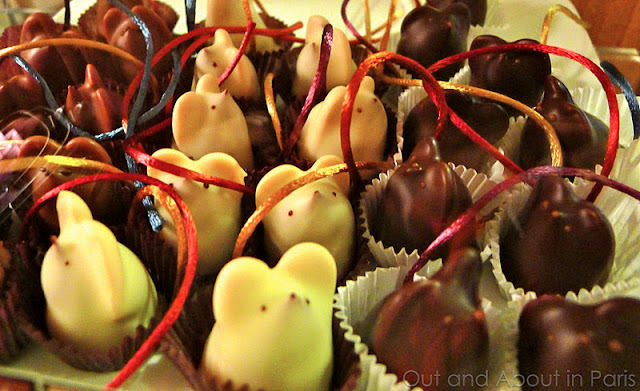