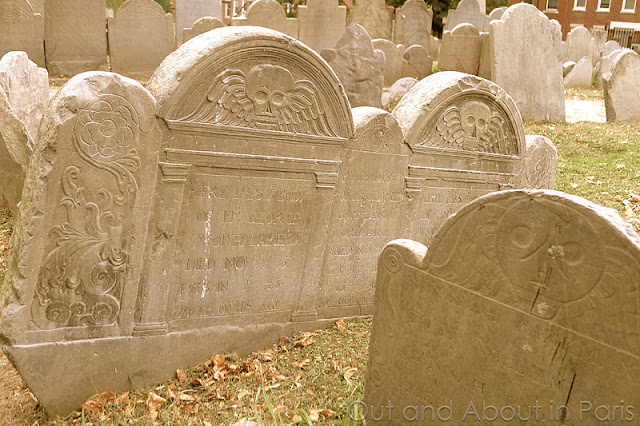 From an informative marker in Copp's Hill Burying Ground:


Fascinating people from Boston's history lie in this burying ground. Look to the left for the double [it's actually a triple] Worthylake gravestone, dating from 1718. Worthylake was the first keeper of the Boston Light. He and his wife and daughter drowned as they rowed to town from Noodle's Island (now East Boston) on a November Day.
If you were at the Copp's Hill Burying Ground on Wednesday, you may have heard a man with an English accent calling across the cemetery, "Did you find it? Is it from 1769?", to which an American woman shouted, "No, but I don't think that this is Snowhill Street!" Were Tony and I looking for buried treasure or for a long lost relative? Nope! We were on the quest of an interesting story - something that people who make YouTube videos and bloggers seem to have in common.

After spotting the aforementioned Worthylake family triple gravestone without any difficulties, Tony and I were stumped by the next set of clues:

"Wander down the path towards Snowhill Street and turn in, behind the tree on the left, to find the Daniel Malcolm stone of 1769. This merchant of Fleet Street opposed the British Revenue Acts by smuggling 60 kegs of wine into Boston from a ship. Legend says that British soldiers read his epitaph and then used the stone for target practice, leaving bullet marks on it."

When Tony spied a large white monument at the bottom of the cemetery, he remarked that it would have made a good target and noted that some of the notches looked like bullet marks. But as we weren't near Snowhill Street, we went back to re-read the marker before spreading out like a pair of detectives on a difficult case. It wasn't long before Tony pointed to the stone in front of him and said, "I think that this is it" before adding that he wasn't sure because there weren't any signs of bullet marks. Since we were following the Freedom Trail and I was feeling rather patriotic, I couldn't help but reply that perhaps there weren't any marks because the British soldiers weren't very accurate marksmen. But a strange thing happened when I put the camera's viewfinder to my eye. There they were -- the marks from the bullets, including a perfect shot that punctured the death's head on the gravestone.

A "winged skull" or "death's head" is carved on the gravestones of Captain Daniel Malcolm and his wife, Ann Malcolm, just as it is on 80% of the tombstones in Copp's Hill. A symbol of death and mortality, the death's head has been used since the medieval period and reflects the influence of the Puritan religion.

Here he's buried in a
Stone Grave 10 feet deep
Cap DANIEL MALCOLM Mercht
who departed this Life
october 23rd 1769
Aged 44 Years
a true son of Liberty
a Friend to the Publick
An Enemy to oppression
and one of the foremost
in opposing the Revenue Acts
on America. 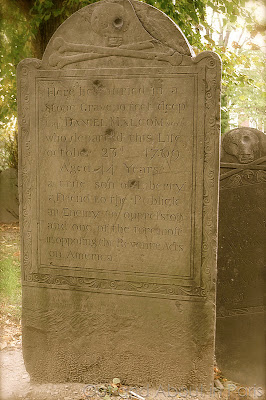