Visiting some of the major champagne houses: Taittinger, Pommery and Moet & Chandon


Just as I was dropping off to sleep last night, Stephane nudged my shoulder and asked if I was planning to write a blog post today. Rather surprised by his question, I mumbled that I was and started to return to that luxurious state when you're just about to.... "What are you going to write about?" Jolted awake, I collected my thoughts and responded that the post would probably feature the major champagne houses. "Are you going to mention that the Cathedral of Reims is where 33 kings of France were crowned?" was the next question that he fired at me. When I replied that I wasn't intending to write about it because we hadn't seen it, Stephane chuckled and said that was the point he wanted to make.

It's public confession time: After Stephane invited me to visit the cathedral and one major champagne house in Reims, I commandeered the entire operation. During "his" weekend, we visited Taittinger, Pommery, Moet et Chandon and the cellar at Maison des Vignes de Verzenay. We did not at any point during the aforementioned weekend step inside the cathedral. But since it's a World Heritage UNESCO site that has been around for 800 years, I'm fairly certain that it will be there during our next visit to Reims. The question is, will Stephane have the chance to see it. After all, I still want to visit Ruinart, Mumms and Veuve Clicquot!


If you would like to plan a trip à la Mary Kay that focuses on champagne, here are some suggestions:

While we didn't see any of the actual production process at Taittinger, Pommery and Moet et Chandon, all of our guides were very knowledgeable and did an excellent job explaining how to make champagne.

At the two houses in Reims, they also recounted the fascinating history of the Gallo-Roman chalk pits that were constructed in the fourth century and used as a place of refuge by 10 - 15,000 people during World War I. The maze of passages at Pommery also housed a hospital, a school and a post office. 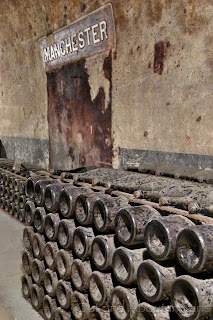 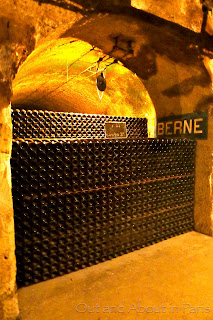 During the tours, we also learned about the history of each house. I particularly liked that Madame Pommery, a very clever businesswoman who assumed control after her husband died, instructed her salesmen to "Pommerize the world!" At that time, Pommery champagne was produced according to regionalized taste preferences so the champagne for Manchester was stored in a separate area from the champagne for Zurich, Bern, Buenos Aires, etc. 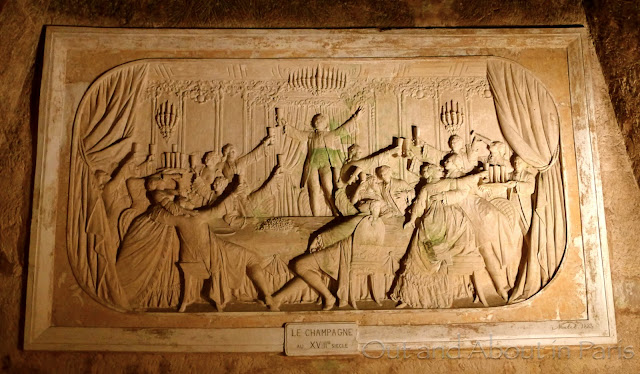 Not only was Madame Pommery a savvy business woman, she was also a great patron of the arts who commissioned an artist to carve massive murals in the chalk walls in the cellars. The one above shows people drinking champagne in the eighteenth century. As they had not yet started disgorging champagne, opaque glasses were used to conceal the sediment. 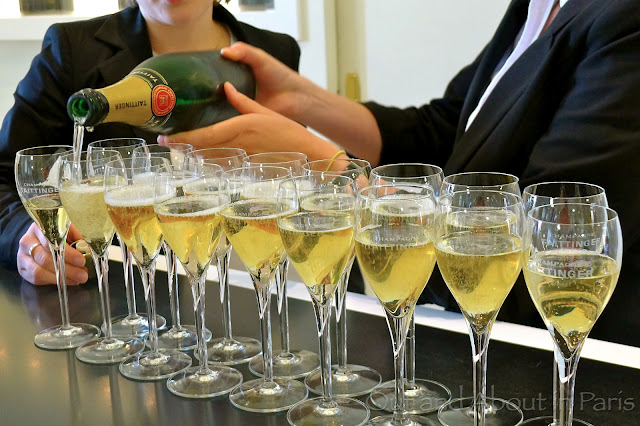 And last but not least, all of the tours ended with a tasting session and the opportunity to buy some bottles of bubbly to take home. After doing some quick price comparisons, we only bought a couple of bottles at Pommery because the champagne is the same price as it is at the stores in Paris. We did, however, take a case of Emmanuel Pithois' champagne home with us because it isn't available here.

Here are links for some of the champagne houses: Taittinger, Pommery, Moet et Chandon, Ruinart, Mumm and Veuve Clicquot.

If you would like to see more photos from our trip to Reims and Epernay, be sure to visit Out and About's Facebook page. I already posted some pictures and plan to add a few more.