"Every man has two countries, his own and France"...but I vote in the USA! 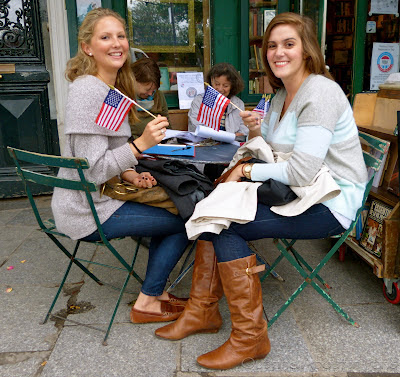 Every man has two countries, his own and France. - Thomas Jefferson

I have two loves, my country and Paris. - Josephine Baker

America is my country and Paris is my hometown. - Gertrude Stein

American expats in Paris. We're such a cliche! Thanks to movies made in Hollywood, many people think that we spend our days strolling aimlessly along the Seine, drinking coffee in dimly lit cafés and wishing that we were French. While I readily admit to engaging in some of those activities, most of the expats I know are like Josephine Baker and Gertrude Stein - Americans, first and foremost.

With the presidential elections fast approaching in the United States, Mlle Ella Coquine and I braved the inclement weather and made our way to Shakespeare & Company to register to vote yesterday morning. Thanks to the patient guidance of Tony Paschall from the Union of Overseas Voters, I was able to correctly complete my form on the second, or perhaps the third, attempt. On October 6, I'll write the name of the person whom I want to lead the United States for the next four years on my absentee ballot and mail it to the United States secure in the knowledge that my voice will be heard all of the way from France.

While the U.S. Department of State does not know the exact number of Americans living abroad, estimates put the number at 6.32 million, excluding the military. There are approximately 100,000 US citizens residing in France.

If you live abroad, it's not too late to register to vote. Please click here to go to the Federal Voting Assistance Program website. But hurry, there are only 41 more days until the 2012 presidential election.