The American Film Festival in Deauville, Salma Hayek and more.


"Since 1975, Deauville has been having a love affair with America and its cinema via the Festival, which highlights the diversity of films from the United States." - Jacques Belin, Managing Director of the Centre International de Deauville

During the long journey home in bumper-to-bumper traffic on Sunday evening, Stéphane and I had plenty of time to talk about the weekend in Deauville and our first American Film Festival. Billed as "a precious moment for all cinema lovers", both of us felt perplexed that the festival doesn't attract a larger international crowd. In spite of all the American flags flying along the roads, in the restaurants and on the boardwalk, it remains a very French festival. It's not that I missed hearing my compatriots' voices, it's just not what we expected after years of attending the Montreux Jazz Festival in Switzerland where the entire town is overrun with music lovers from around the world.


Frustrated by the lack of timely information about the Festival on their website, Stéphane and I had adapted a wait and see approach to planning. After asking for advice when we picked up our passes, we decided to attend a round table discussion with French and American screenwriters of feature films and television series. As fans of the HBO drama series, "The Sopranos", Stéphane and I chuckled aloud as we listened to supervising producers Diane Frolov and Andrew Schneider describe their creative writing process that continues even after the married couple has wished each other good night and gone to bed. When asked about current television series that they like to watch, the Franco-American panel answered, "Homeland", "Breaking Bad", "Madmen", "Boardwalk Empire", "Justified" and the BBC series, "Luther". 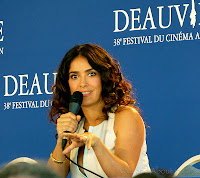 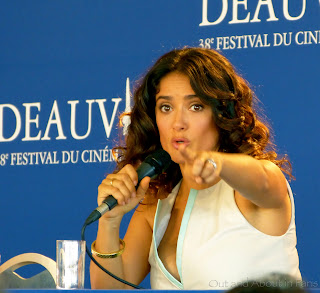 Perhaps one of the biggest advantages of attending a small festival is that it allows visitors to have closer access to the actors, actresses, producers, directors and other film professionals. After standing cheek to cheek with a crowd of locals who were complaining about French organization as they aggressively pushed in front of each other to gain access to the press conference with Salma Hayak, Stéphane and I were pleased when we made the cut. Within minutes, everyone's animosity evaporated as Salma worked her charm. Pointing her finger at one reporter, Hayek chastised him for making her cry by asking about the making of "Frida", the biography of one of Mexico's most prominent painters. As a blogger in a room full of journalists, I felt too intimidated to ask a question even after the reporter from "Le Parisien" raised his hand to inquire how it was making "The Savages" with Oliver Stone after working together on "U Turn". With a coquettish smile, Salma replied, "Thank you. I'm so happy you think that I should have had that role instead of Jennifer Lopez. No, no...don't feel bad. It should have been me!"

Salma Hayek is an accomplished actress, director and producer with a lot of charisma. It's little wonder that the American Film Festival in Deauville decided to pay tribute to her many accomplishments by dedicating a beach cabin on the boardwalk to her.

Please click here if you would like to watch a video of the press conference with Salma Hayek. 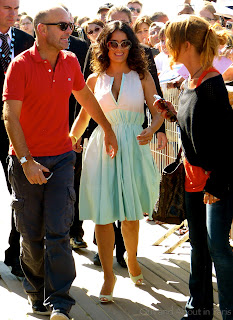 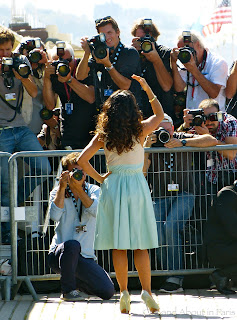