Kale and Joseph the Butler make their grand debuts at Verjus Wine Bar in Paris! 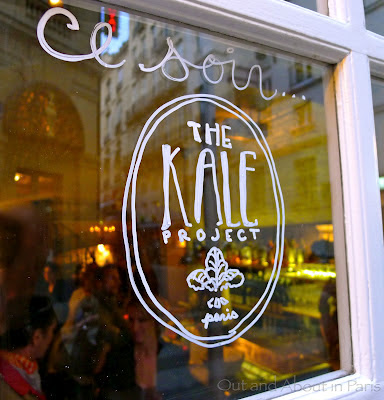 Once upon a time in a faraway land (a.k.a. New York City), there was a young princess who worked in an advertising agency by day and threw rooftop cocktail parties with her friends at night. One day, she spied Sir Lancelot riding in an elevator, not on a white steed, and fell head over heels in love. Not only did Sir L sweep the princess off her feet, but he took her to a faraway land. Paris. A city bereft of English speakers and of a healthy, green vegetable called kale.

Not being one to sit around and complain, the princess was spurred into action. She talked with chefs, visited restaurants and convinced French farmers to start growing this superfood. To celebrate the fruition of her labors, she organized the first ever kale event in a city renowned for its food. Kale deprived expats and visitors from afar gathered at Verjus Wine Bar on Thursday evening to partake of tasty dishes like fried chicken with a kale twist and to-die-for buratta and kale salad.

And that's how the Kale Queen was born! Please visit The Kale Project to learn more.

Kale wasn't the only hot item making its debut in Paris on Thursday night. To the delight of many Parisian bloggers, Joseph the Butler from Chicago made first public appearance, as did CBaarch and S from Canada. As always, it was heartwarming to see how supportive the Parisian expat community is of each other and to reconnect with Finding Noon, Tales from the Chambre de Bonne and Paris Cheapskate. It was also a real pleasure to finally meet HJ Underway, Totally Frenched Out and Bryan Pirolli.