Making Memories While Riding in the Paris-Deauville Vintage Car Rally


As Jean-Pierre's gloved hands maneuvered the sleek Delage around a tight curve, I gazed at the sun-dappled landscape and told myself to remember every detail of that specific moment in time. The sensation of the cool wind blowing across my cheeks, the soft buttery feel of the leather as I ran my fingertips lightly over the back seat and the earthy smell of the French countryside. They all merited my full attention. For unlike most trips where the sole purpose is getting from Point A to Point B as quickly as possible, the journey is as important as the destination while riding in one of the best classic car events in France, the Paris-Deauville Rally. 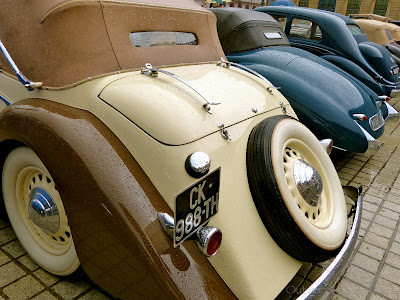 The adventure had started the previous afternoon when Jérôme Hardy of the French Automobile Association greeted me warmly at Place Vendôme and pointed to the luxurious Delage cabriolet in which I would spend the day. Unfamiliar with the descriptive expressions used by vintage car aficionados, I could only utter, "She's exquisite!" As the Brass Band of the Republican Guard created a festive atmosphere by playing rousing tunes, Jérôme introduced me to Jean-Pierre so that we could make arrangements to meet at Château de Versailles bright and early the following morning.


Worried that I would somehow oversleep and miss my train, I spent the night tossing, turning and wondering what to wear. When the alarm finally went off at 6:00 am, I jumped out of bed, hopped in the shower and threw on some clothes. Today was the day! I was riding in the 46th Paris-Deauville Rally. 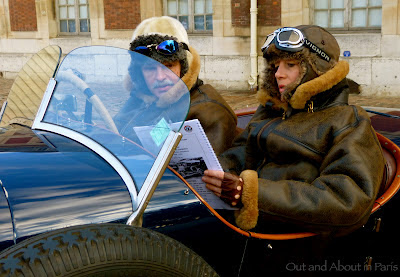 After a continental breakfast and a pit stop at the Hotel de France, the international group of French, English and German drivers and their co-pilots returned to their pre-1941 cars and pre-1960 coupés and cabriolets to prepare for the first leg of the journey. Noticing that all of the people in the cabriolets were bundled in furry jackets, gloves and hats, I was thankful when one of the French women kindly offered to let me borrow her beanie. With the hat pulled snugly over my ears, I settled into the back seat of the Delage behind Jean-Pierre and his charming wife, Marie-Claire. 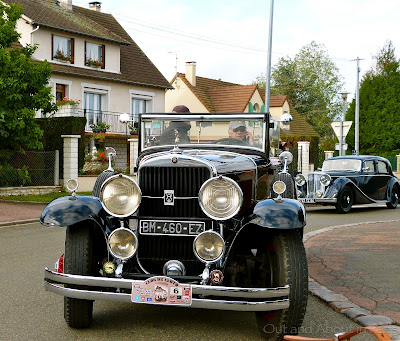 The convoy of vintage Rolls Royces, Bentleys, Bugattis, Jaguars, Mercedes, MGs and Delages created quite a stir as we drove along narrow country roads and through quaint villages on our way to the Normandy coast. 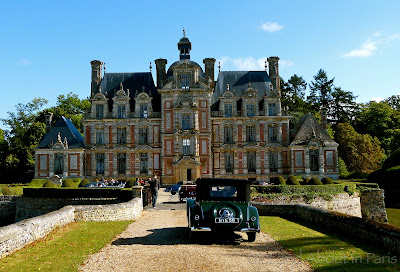 Right on schedule, we passed through the gates of the magnificent Château de Beaumesnil for a tour of the castle known as the "Norman Versailles" and a tasty lunch. A rare example of baroque architecture, the castle was built during the reign of Louis XIII and has an important collection of 17th and 18th century books.

With only 75 kilometers left to go, it wasn't long before the cars assembled in a parking lot near the port of Deauville to wait for the mayor to welcome us officially to the city. 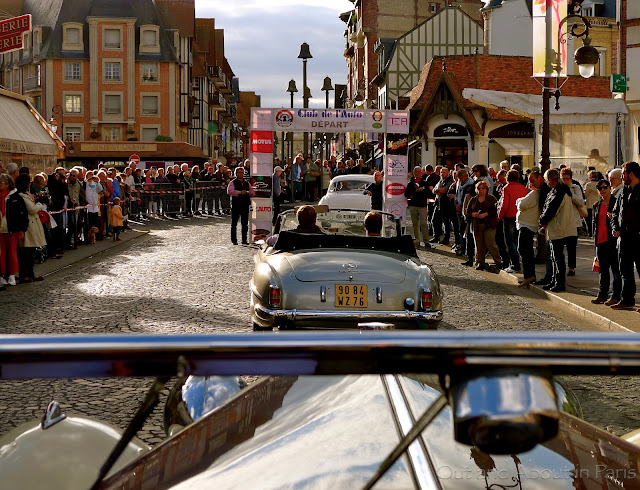 For someone who likes to stay in the background and maintain a low profile, it was an odd sensation to ride in such a luxurious car that attracts so much attention. Inching along the cobblestone street leading to the Town Hall of Deauville, I overheard people exclaim with delight as they focused their cameras on the Delage. And for once, I set my camera down. After all, this was a moment that I wanted to fully appreciate and remember for the rest of my life.

Even though the official end of the rally isn't until Monday morning, I said goodbye to Jean-Pierre and Marie-Claire at the Hotel Normandy Barrière on Friday evening. During the return trip to Paris, I gazed out the train window and recalled all of the events of the day. Many thanks to Jérôme for making it possible, Jean-Pierre and Marie-Claire for letting me ride with them and the other participants for their warm reception. Riding in the 46th Paris-Deauville Rally was a truly memorable experience!

Want to see a photo of the Delage? There will be lots of pictures of the automobiles in tomorrow's post.