What a coincidence! Thanks to a tweet by the Union of Overseas Voters, I learned that the United States Constitution is 225 years old today. It feels like serendipity because the French National Assembly is one of the monuments that Stéphane and I visited during European Heritage Days last weekend.

The French National Assembly, located in the Palais Bourbon on the Quai d'Orsay, was created when elected delegates decided that a single man, King Louis XVI, should no longer control the country. After declaring themselves to be the "National Assembly" on June 17, 1789, the delegates gathered in an indoor tennis court at Versailles on June 20 and swore that they would not return to their home regions until they had provided the kingdom with a constitution that would ensure the representation of the people at the highest level of the State.

According to their informative brochure, the National Assembly is "the living place of democracy where reflecting, debating, keeping a watchful eye on government's policies, taking into account the aspirations of citizens, all must contribute to bring out the notion of general interest in an increasingly complex and demanding society."

It sounds good, but does it work? Unfortunately, as an expat who resides in France but doesn't vote, I'm not familiar enough with French politics to answer that question. What I do know is that Stéphane and I were thankful to have the opportunity to visit the French National Assembly. It was well worth the ninety minute wait on a beautiful Sunday afternoon.

Even though I still plan to write a post about our visit to the National Bank of France, I'm going to take a break from historical buildings tomorrow because I'll be at Galerie Lafayette's World Largest Fashion Show. If you would like to see behind-the-scenes pictures of some of the 400 models as they prepare to saunter down the catwalk, click the "follow" button on Twitter or "like" on Facebook. 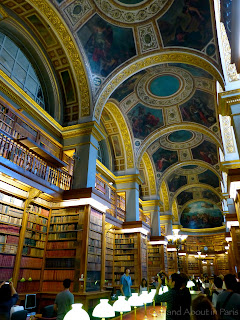 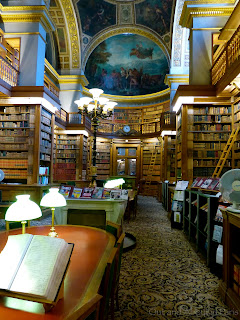 The Library contains over 700,000 volumes and is famous for its ceilings painted by Eugène Delacroix between 1838 and 1847.
Labels: European Heritage Days French government French National Assembly French politics