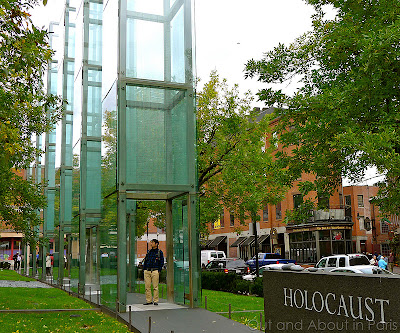 Blogging is turning out to be like the perfect host at a cocktail party, the kind who takes you by the arm and introduces you to another guest with whom you have a lot in common. That's what happened when my blog introduced me to Tony Mason via a comment that he made about Private John Daum and the American Cemetery in Normandy. After exchanging a couple of emails, Tony and I discovered that we would be in Boston at the same time and arranged to meet for a cup of coffee. When we realized that we both wanted to visit Bunker Hill, which is at the very end of the Freedom Trail, we slung our cameras around our necks and headed out the door.

Even though it's not listed on the official tour guides for the Freedom Trail, our first stop was the New England Holocaust Memorial, located near Faneuil Hall. 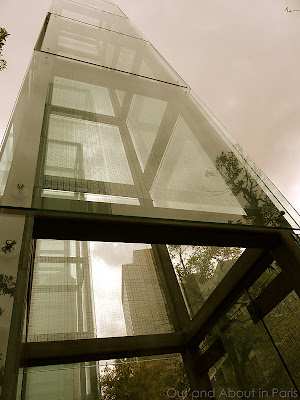 Gazing up at the full height of the six glass towers that represent the six primary death camps (Majdanek, Chelmno, Sobibor, Treblinka, Belzec, and Auschwitz-Birkenau) and the six million Jews who were killed by the Nazis, I ran my finger over one of the numbers etched in the glass and thought of all of the lives that were lost. Had the identification number been tattooed on the arm of a child, a mother, a son or a grandfather? I don't know, but it was the number of someone who was loved, whose life was intertwined with that of others and who was killed for their religious beliefs. 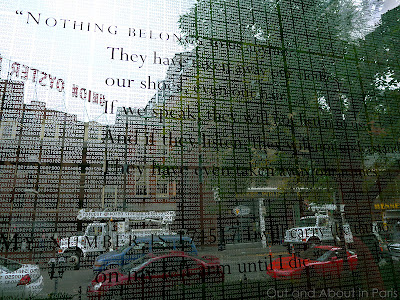 Superimposed on top of the seemingly endless rows of six million numbers are statements made by survivors and witnesses to the death camps. 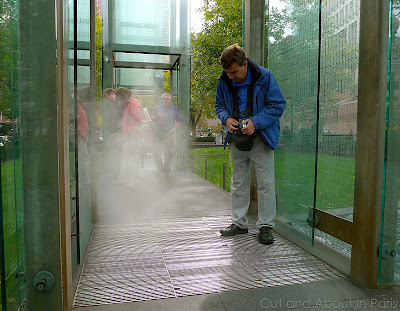 Tony and I were intrigued by the warm steam rising from the vents at the entrance of each of the glass towers of the Holocaust Memorial and came up with various ideas as to its meaning. According to what I was able to find online, the architect who designed the memorial, Stanley Saitowitz, said that the steam is "like human breath as it passes through the glass chimneys to heaven." For me, it was more evocative of the horrors of the gas chambers.

Knowing that Tony does a lot of research for his YouTube videos, I'm anxious to see what he'll learn. As he's planning to complete some other travel videos before starting the Boston ones, take a look at the one that he did of the Memorial to the Murdered Jews in Europe (The Holocaust Memorial) in Berlin if you would like to see some of his work. 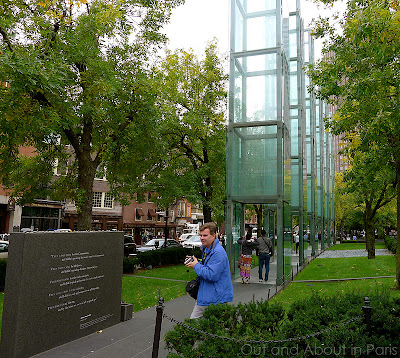 Used to visiting places on my own, it was fun to watch Tony in action. Here he is preparing to film the black granite monolith bearing the legendary inscription: