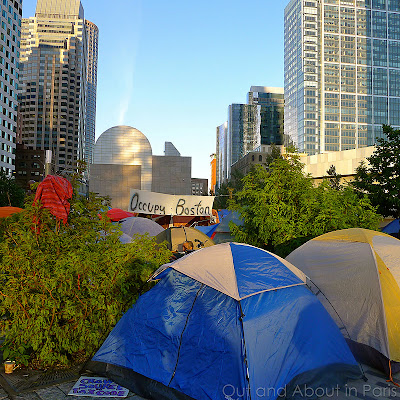 "Our country is owned by the top 1%. We are the 99%. Join the conversation!"
After sipping champagne and nibbling savory sandwiches during afternoon tea at the swanky Boston Harbor Hotel with Bridget and Sara, we stumbled across the "Occupy Boston" encampment at Dewey Square. Wishing that I was wearing something other than a blazer and trousers that seemed to reek of Wall Street, I was nonetheless warmly welcomed at the information center in "Tent City" and encouraged to visit the camp and talk with the protesters. While their reasons for joining the national movement against financial greed and corruption vary, all of their stories are undeniably compelling.
Looking up at the imposing buildings dominating the financial district of Boston, I wondered what the future holds for the 23 year old recent graduate of the University of Massachusetts with whom I spoke. Grateful that her aging parents allowed her to move back home when she couldn't find a full-time job, she feels guilty about the toll that the 12 hour shifts at the hospital are taking on her mother and knows that every penny that she takes from her parents delays their retirement. Wanting to change how business and government operate, she joined Occupy Boston movement to work for greater economic equality.
In another part of Tent City, I met a middle-aged woman whose sign said that she is the "face of homelessness." Explaining that she lost her house when she was unable to find a new job after taking time off to care for her dying mother, she's optimistic that Occupy Boston will force an ongoing discussion about America's economic system and the problems faced by people like her.
Occupy Boston is part of the Occupy Wall Street movement that is currently sweeping across the United States. Angry that the top 1% of the population owns 50% of the nation’s wealth, the protesters are well organized and intend to remain at Dewey Square until their voices are heard. With medical, logistical, spiritual, library and information tents, the encampment resembles a small town whose residents are working together to achieve a common goal. And in case you're wondering about toilet facilities, they're using the ones in the nearby train station.
University students, members of labor unions and Occupy Boston demonstrators will join together for a solidarity march starting at the Boston Commons at 1:30 p.m. today. 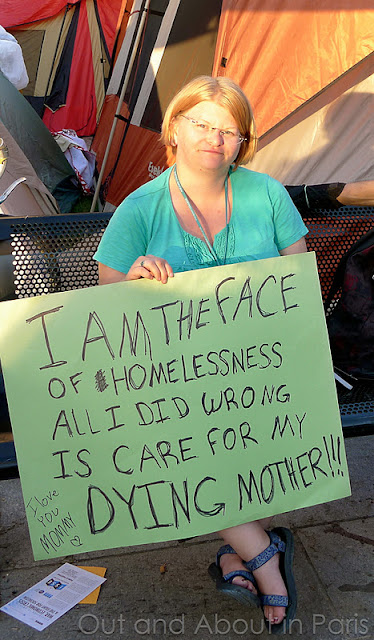