It's time for tights. "Young man, you don't have the weight!"


Rain, brilliant sunshine, thunderstorms, we saw it all yesterday. As the warm days grudgingly turn cold, eye-catching advertisements for tights are starting to appear. But after having spent a large portion of my life in the tropics, I'm still not convinced that winter is the best time to bare my legs to the frigid blasts of Arctic air blowing through the tunnels of the metro. Plus, the tights that I saw at Galeries Lafayette last year were way too sexy for my buttoned-down self. I don't think that there's anything in my closet that would go with the red ones!


What's in store for this winter? 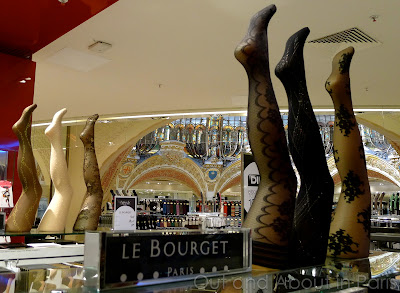 With lots of black lace and monochromes, it initially appeared as if the forecast would be rather grim. Nothing lighthearted, nothing frivolous... 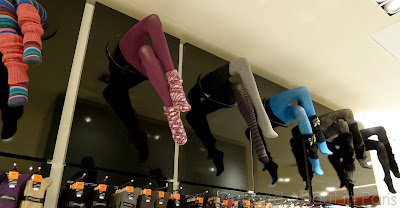 But then I spied these colorful tights sticking out of the wall. With multi-hued leggings, it looks as if the long grey days of winter will be more cheerful. Even though I'm not going to wear turquoise tights, I'll be happy to see them on someone else.

Have you seen the movie, "Paris, Je t'aime"? If so, you probably remember the scene where an American tourist becomes involved in a conflict with a young couple in the Tuileries metro station after breaking the cardinal rule of "no eye contact".

Well, I had my own moment in the metro yesterday when the young man (wearing the white t-shirt in the photo) shouted across the train tracks to ask if I was taking a picture of him. Darn - so much for discretion! Hoping to avoid a scene, I reassured him that I was taking a photo of the advertisement behind him -- and not of him. Wrong answer. He turned around, read the slogan, laughed out loud and shouted that he wanted to be in the picture, too. By this time, we had attracted quite an audience on both platforms. Even the more sophisticated Parisians were probably wondering why the strange American woman was busy snapping photos of advertisements and young men. Thank goodness that I wasn't wearing a pair of red tights like these!