Need a bit of luck? Rub John Harvard's (or my) feet! 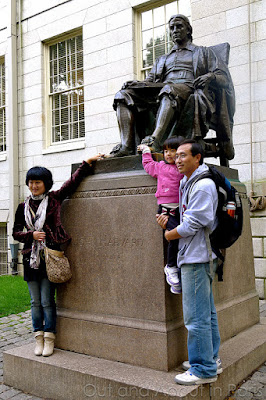 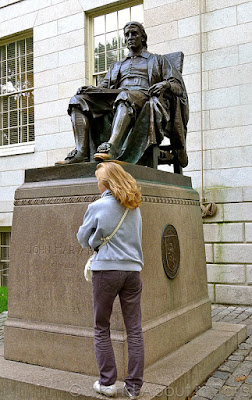 After waiting for about fifteen minutes to get a picture of the statue of John Harvard on its own, I decided that the people who stood in line for their chance to rub his feet for a bit of good luck* make for a more interesting photo than the statue itself, even if it is supposedly the third most photographed statue in the country. As it's also known as the "Statue of Three Lies", I'll let you decide if it's lucky or not to rub a spot that has been touched by thousands of others. The student guide of our historical walking tour of Harvard University explained that the inscription "John Harvard, Founder, 1638" is misleading because (1) a handsome Harvard student was used as a model for the statue since there weren't any portraits of John Harvard, (2) Harvard College was not founded by John Harvard, only named after him when he made a large donation, and (3) the College was founded in 1636 by the Great and General Court of the Massachusetts Bay Colony.

*Good luck - if you believe the story about rubbing John Harvard's feet, it's a proven fact that massaging a certain blogger's feet also brings good luck as does eating a bowl of Lucky Charms cereal every morning! 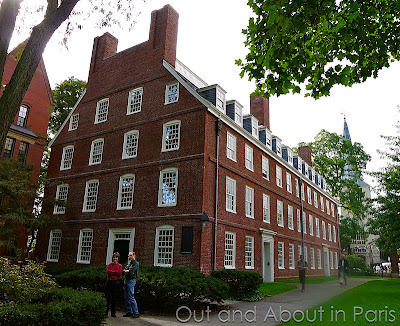 Built in 1720, Massachusetts Hall is the oldest building still standing at Harvard and the second-oldest academic building in the United States. Apparently, the 640 Continental soldiers housed there during the peak of the siege of Boston were more rambunctious than the 24 freshman currently residing in the hall. In their quest for freedom, the patriotic soldiers melted down the brass doorknobs to make bullets to fight the English during the Revolutionary War. Their actions resulted in £50 pounds worth of damage, quite a feat considering that the entire building cost £3,500 to design and build!

With interesting anecdotes about the history of Harvard University, the buildings and student life, the free historical tours are a pleasant way to pass an hour in Cambridge. Wonder why Harvard undergraduates used to be required to pass a swimming test in order to graduate? Take a tour and hear the urban legend about Harry Elkins Widener, a Harvard alum who went down with the Titanic. You can also download an iPhone app or pick up a brochure for a self-guided tour at the information center.

If you're looking for a place to have a delicious hot chocolate and a tasty treat after your tour, I highly recommend Burdick's Cafe in Cambridge.