That Old Cape Magic! The Glass Onion in Falmouth


One of the biggest joys of being a parent is watching your children grow into adults - the kind that you really enjoy being with.  Another one is seeing that your daughter, who spends her days doing research at Woods Hole Oceanographic Institute, still likes to play in the sand.  So, when Sara said that we should write "Out and About in Paris - the Cape", I readily agreed.  It took a few attempts to make an etching that was worthy of a photo.  The first one, written with a stone, turned out to be too big and the second one was washed away by a rogue wave.  While Sara would have decorated her design with two rocks and some strands of seaweed, I assumed the role of creative director and voted for the simplicity of a single stone.

Wiggling our toes in the sand reminded Sara of an earlier post that I had written about the state of my shoes in Paris.  So, here are the same shoes on vacation.  They look rather footloose and fancy free, don't you think? 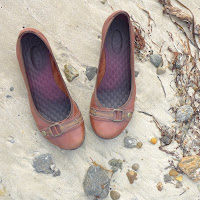 And being intrepid explorers, we ventured into the frigid water of the Atlantic Ocean for a few seconds before making a quick retreat.  The cold temperature didn't seem to bother these children, who continued playing in the water as the evening fog rolled ashore. 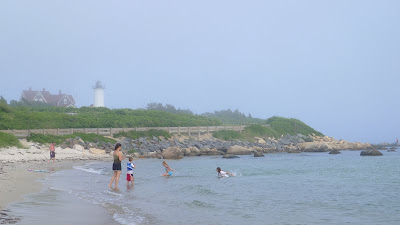 The brisk walk to the light house in the salty sea air made us hungry, so it was fortunate that we knew exactly where we wanted to go for dinner.  Sara and I have been wanting to return to The Glass Onion, a restaurant that easily rivals any of those that I've been to in Paris, ever since we dined there one snowy evening last January.  We started off with a glass of sparkling Gruet Brut from New Mexico and moved on to a delectable meal of goat cheese and French peach salad, house made mozarella and heirloom tomatoes, seafood risotto, and pan seared yellow fin tuna.  If you're anywhere near the Cape, I highly recommend this restaurant! 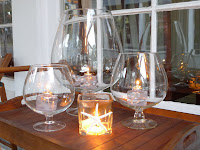 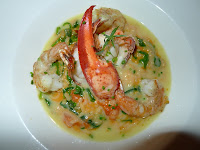 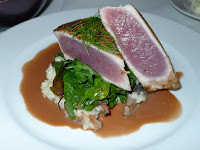 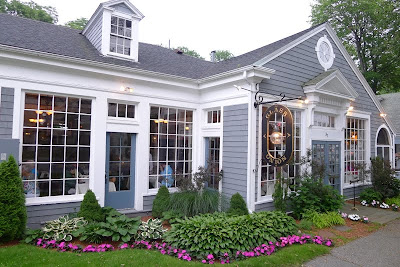