Why do some people take potatoes to Père Lachaise Cemetery?  Let me answer that question with another one -- Would one of the French culinary favorites, "steak frites", be as appealing if it was served with broccoli instead of with french fries?  If you answered an emphatic "No!", then perhaps you should consider bearing a potato to the grave of Antoine-Augustin Parmentier (1737-1813) to thank him for convincing the French government to change its stance on this stem tuber.  Prior to Parmentier's campaign, the French Parliament had strictly forbidden the cultivation of potatoes for human consumption because they were thought to cause leprosy.

Parmentier, who had miraculously survived, or so it was thought, on a diet of potatoes after he was captured by the Prussian Army during the Seven Years' War, formulated a clever marketing campaign for potatoes after his release from captivity.  He hosted dinner parties that featured potato dishes for such dignitaries as Benjamin Franklin and offered potato flowers to Marie-Antoinette and King Louis XVI.

Even after the Paris Faculty of Medicine declared potatoes to be edible in 1772, French people continued to be reluctant to eat them.  Public opinion changed when potatoes were cultivated during the first siege of the Paris Commune in 1795 to help stave off famine and the royal Tuileries Garden was turned into a field for growing potatoes.

So, the next time that you're munching on some french fries in Paris, take a moment to pay homage to Parmentier.  Or better yet, take a potato to his grave at Pére Lachaise! 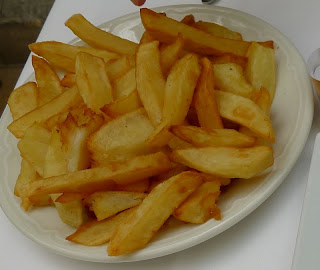 Where in the World is Jim Morrison's Bust?
The Story of Héloïse and Abelard 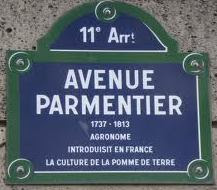