Riding the Rails on the TGV 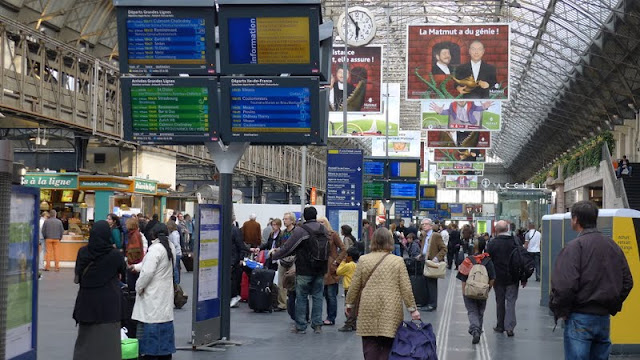 Ever since the long ago day when a group of French people took pity on a lone American traveller and helped me to celebrate my 20th birthday by sticking matches in a miniature cake and singing "Joyeux Anniversaire" in the snack bar of a TGV, travelling by train has been my preferred way to get from Paris to Switzerland.  The excitement starts when you arrive at the station and weave your way through all of the people who are on their way to somewhere else.  Train stations have a different kind of vibe than airports because everyone is in constant motion, unlike at Charles de Gaulle where the passengers who have a short layover know that they don't have enough time to venture into Paris and resign themselves to their fate by becoming one with a seat in the terminal.  And train travel is even better if I manage to purchase my ticket enough in advance so that I can travel first class, which is sometimes just a few Euros more than second class. 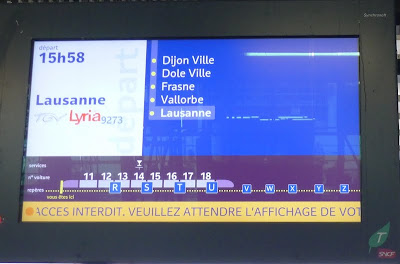 Even though my Swiss husband would say that I still cut the timing too close for comfort, one of the most important things about travelling by TGV is to arrive well in advance of the departure time so that you have time to stow your luggage and to settle into your seat.  I always take a minute to look at the screen at the beginning of the platform to locate my train car because they aren't always in consecutive order like the one shown above, particularly if they've joined two trains together.  Unless the train is about to leave, wait to board until you reach your car because otherwise you'll end up struggling down the aisle of seemingly endless cars with your suitcase.  And even if you don't have a suitcase, it's still not fun trying to navigate the aisle because it's invariably clogged with other passengers. 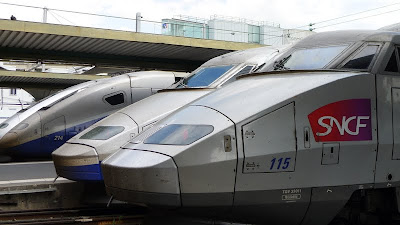 On the TGV Lyria routes between Paris-Geneva and Paris-Lausanne, attendants serve a welcome drink and a light meal, which comes in particularly handy if you're like me and didn't have a chance to eat anything because you were rushing to catch the train.  English language newspapers and magazines, such as the Herald Tribune and The Economist, are usually available in first class.  Regrettably, there isn't wifi on the TGV, but there are electrical outlets in first class and in some of the cars in second class, depending on the route.  With the exception of the croissants, the food that is available in the second class snack bar is overpriced and inedible.  I found that out the hard way after paying a small fortune for a cup (yes, a cup!) of vegetarian lasagna that ended up in the garbage.  If you're travelling second class, do yourself a favor and pick up a sandwich at the train station before boarding the TGV.


So, sit back, relax, and enjoy the ride.  It really is a pleasant way to travel.  Cheers to the 30th birthday of the TGV!

Beind the Scenes at the SNCF