Out of Paris at the 20th Music Festival in Geneva 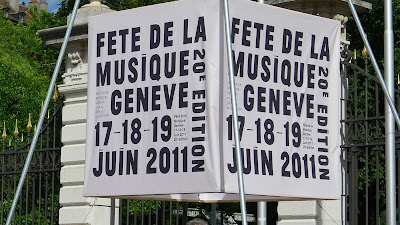 In between eating an appetizing lunch of roast beef and salad and enjoying the scenery whizzing past at a 170 miles (270 km) per hour through the window of the TGV bound from Paris to Geneva, I spent my time finishing off some blog posts for this week without knowing that Marc-Antoine, my brother-in-law, was planning to take me to the 20th Music Festival in Geneva.  Not being immune to the influence of their neighbor, Geneva based their festival on the natiowide music festivals that are held in France every year on June 21 to celebrate the first day of summer.  The festival was so much fun that I decided to shelve the post that was scheduled for today so that I could share some photos with you. Plus, I have to admit that I'm just a wee bit proud of Switzerland and this gives me another opportunity to write about it. 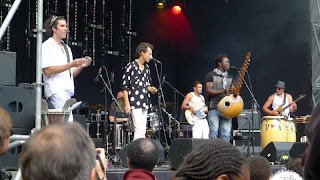 After watching a troupe of muscular acrobats in Reformers' Park, we walked over to listen to the band that was playing next to the imposing Reformation Wall.  Inaugurated in 1909, the stern faces of the reformers, William Farel, John Calvin, Théodore de Bèze, and John Knox are a stern reminder of the city's Protestant heritage and offered an interesting contrast to the festive atmosphere.


With music ranging from hip hop to classical to jazz, the array of food  proved to be equally impressive.  Vendors were offering everything from spicy Indian curries to Mexican churros, but it was impossible to find anyone selling raclette, a Swiss dish of melted cheese served with boiled potatoes.  The closest that I could find to a Swiss speciality were these men grilling schüblig, the famous Swiss sausages from St. Gallen.  It seems as if the 38.58% of foreigners living in Geneva have had a major impact on the culinary scene. 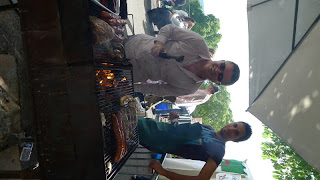 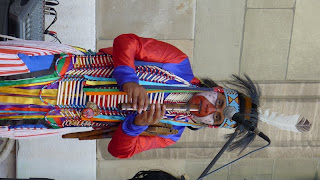 Cities always like to boast that they have the tallest building or the largest harbor, but being slightly more modest, Geneva has the world's longest wooden bench (413 ft/126m) with the Salève mountain in the background.


As I'll be in Geneva for the next couple of days, I may write some more posts about what I'm doing here or I may use the posts that I've already written about Paris.  As the famous song says, "Que sera, sera, whatever will be, will be". 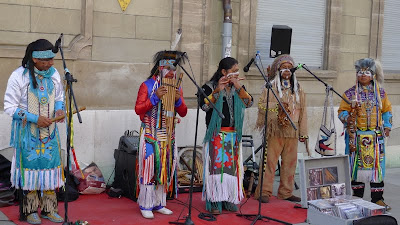