A Falafal Sandwich - The Paris/Boston Connection 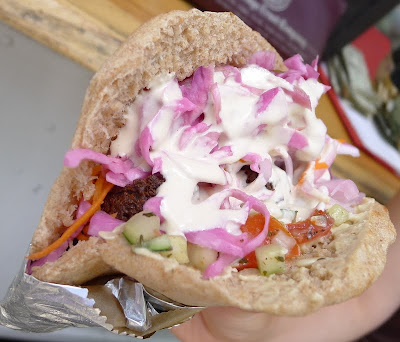 Ever since I arrived in the USA, I've been keeping my eyes and ears open for interesting connections between Paris and Boston.  I've found some historic ones, a couple of artistic ones, and now a culinary one.  No, it's not a fancy French restaurant with a chef who went to le Cordon Bleu Culinary School, it's the falafal sandwich served at the Clover food truck at the Massachusetts Institute of Technology (MIT).  Now, while most people may shudder when they think of the food served on college campuses, I had heard that the lunch trucks at MIT are a great option for a fast meal and was willing to give one of them a try. 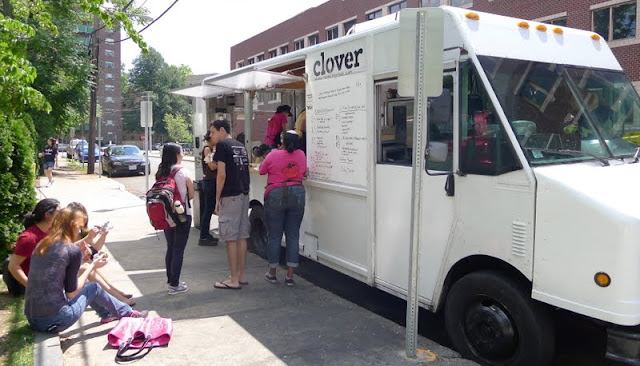 After perusing my options, I picked the truck that had a group of people gathered around it even though it was well past lunch time and ordered a BBQ Seiten sandwich with rosemary french fries.  While waiting for the fresh potatoes to be fried, I started chatting with the crew of friendly women who work at Clover.  When I mentioned that I live in Paris, one of them told me that their chick pea fritter sandwich was influenced by the most famous falafal in Paris, l'As du Falafal.  Starting to regret that I had already ordered a BBQ sandwich, she promised to tell me when another customer's falafal sandwich was ready so that I could see how it compares with those in Paris.  Even though I didn't get a chance to sample it, the falafal sandwich definitely resembles its Parisian counterpart, albeit a slightly skinnier version of the overstuffed one in Paris.  And how were my freshly prepared rosemary french fries?  Absolutely delicious - the crisply fried rosemary was the perfect addition!

The Clover food truck has been serving hungry MIT students, professors, and visitors (including those from Paris!) since 2008 when it was originally used to run food trials for the Clover restaurant that has recently opened in Harvard Square.  If you're in Cambridge, be sure to stop by and ask for the Parisian falafal!  They're open weekdays, even during the bitterly cold winters, from 8:00 am until 7:00 pm.  And if you're not in Cambridge, there are Clover food trucks parked at various locations throughout Boston. Take a look at the Clover Fast Food website to learn more.