How to save money in Paris - go to the Hermès sale 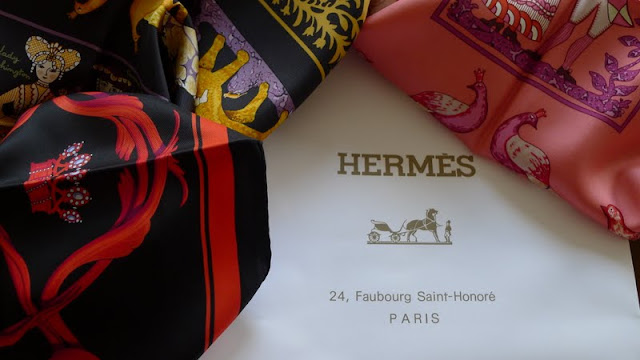 I could have saved € 31,500 by buying the crocodile velour jacket that I tried on at the Hermès sale yesterday. Marked down from € 64,000 to €32,500, it was a real bargain and looked fantastic!  But not being in such a thrifty mood, I decided to save less money by buying a couple of the square scarves that were € 165 instead of the normal price of € 292. And after waiting in line for about 30 minutes before I could even touch them, I wasn't about to go away empty handed.

As it was my first time to attend the Hermès sale, I had lots of questions about how they work. I've put together some Q&As that I hope will help you:

Are the Hermès sales at the Hermès stores? No. I guess that Hermès thinks that their stores would lose some of their cachet if they were decorated with sale signs, so the sales are always held off site at the Palais des Congrès in Neuilly. Métro Porte Maillot.

What kind of items are on sale? This was the clearance sale of the winter line, so there were sweaters, coats, hats, slacks, blazers, jeans, skirts, jackets, scarves, bags, bracelets, necklaces, shoes, boots, and ties.

Should I plan to go on the first day? Unless you want to buy some special shoes or a purse, I don't think that it's necessary because one of the saleswomen assured me that they replenish their stock every day. She recommends going on Thursday afternoon because the lines are usually not as long as the lines on the first day.


What should I do when I find a scarf that I like? Grab it before someone else does! But more seriously, after selecting a scarf (or two), give it to one of the saleswomen who will put it in an envelope. She'll give you a voucher to exchange for your scarf when you pick it up at the cash register. Larger items may be placed in the plastic shopping bags.

Is there a limit to the number of items that I can buy? Yes. You may purchase up to 10 square (carrés) scarves and 10 ties. Other articles are limited to five pieces of the same item, with the exception of leather bags (1), leather toiletry bags (4), belts (1), and small leather goods (2).

Can I pay with my credit card? Yes, they'll also accept the deed to your house, your plane ticket home, and permanent indenture-ship. I suspect that's what happened with the British saleswoman with whom I spoke because she gave me some good advice based on what she used to do when she attended the sale as a customer rather than as an employee.  She's probably working there to pay off the crocodile jacket that she bought at the last Hermès sale. 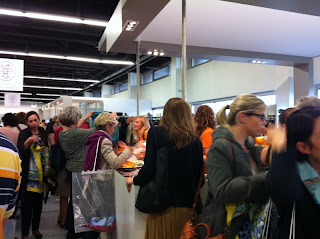