The Memorial to the Chevalier de Saint-Sauveur in Boston 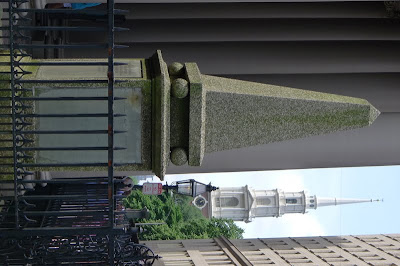 In my quest to find some little known links between Boston and France, I stopped by the tourist information center yesterday and was pleased to learn that there are several interesting stories.  The first one concerns the Chevalier de Saint-Sauveur, who was the first chamberlain of the brother of King Louis XVI, and a brawl over some French bread that ended disastrously for the 28 year old Frenchman.

After a treaty of alliance was signed between France and the United States on February 6, 1778, France sent a fleet of twelve ships and 5 frigates under the command of Count d'Estaing to aid the Americans in their fight against the British.  After a series of mishaps, the French fleet ended up sailing to Boston to undergo essential repairs.

While the French fleet was received with enthusiasm, there were also British sympathizers in Boston who were not pleased that the French were assisting the Americans.  When the Admiral set up a bakery for his fleet in town, an unruly mob gathered on the evening of September 8, 1778 and demanded bread - something that I can easily understand after having had the pleasure of eating French baguettes for the past three months!  Anyway, things got out of hand and the Chevalier de Saint-Sauveur was mortally wounded when he valiantly tried to protect the bakers and to restore order. 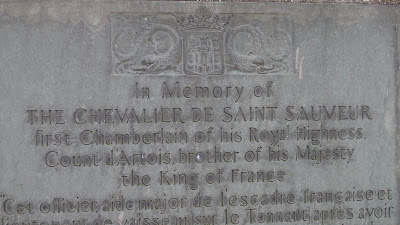 Knowing that the young nobleman's death could have an impact on relations between the two countries, the General Court of Massachusetts quickly voted to place a "monumental stone" at the young man's place of burial with an inscription written by Count d'Estaing.  But because there was still unrest in Boston, it was decided that the young man's body should be buried as quietly as possible. Everything happened so quietly that the citizens of Boston forgot their promise to place a monument on the Chevalier de Saint-Sauveur's grave for 127 years!

In 1903, when the French government published a list of all of the Frenchmen who had died during the American revolution, the story of the Chevalier de Saint-Sauveur was revived and brought to the attention of the Americans after Col. Chaillé-Young, one of the authors of the French document, asked about the location of the non-existant monument to the young Frenchman.  Shortly thereafter, a committee was formed to investigate the matter and reported, "In war and in peace, Massachusetts keeps her promises.  Here is an event filled with uncertain and distressing possibilities at the time, which, in the more comprehensive view of the present, had the matter not been disposed of to the entire satisfaction of the French officers, might have ended the French alliance and changed materially the subsequent history if not the results of the war of he revolution."  The monument to the Chevalier de Saint-Sauveur at King's Chapel was unveiled by Governor Samuel W. McCall on May 24, 1917, at a time when America and France were allies in another war. 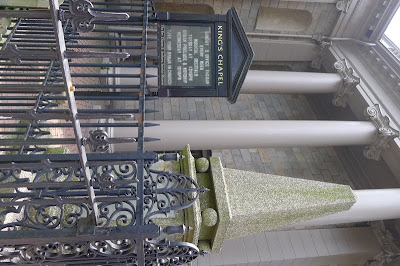 Click here to read the complete history of the monument to the Chevalier de Saint-Sauveur.

In case you're wondering why angry mobs would demand French bread, read the related posts about baguettes: