While wandering through the maze of narrow streets in Nîmes last weekend, I thought about how different it is from Paris, with its Grand Boulevards and row after row of homogeneous apartment buildings. Whether you approve of Baron Haussmann's modernization of the French capital or not, Tatiana de Rosnay's new book, The House I Loved, is sure to enthrall those who want to learn more about this fascinating period in history.

Although Mrs. de Rosnay's latest novel will not be released in the United States until February 14, 2012, I was fortunate enough to get a sneak preview of it when she read twenty pages of it at the American Library in Paris on Thursday night. The brief introduction to Rose, whose dead husband's familial home stands in the way of Haussmann's ambitious plans for Paris, left me yearning for more. Written in the form of a long letter to her beloved Armand, Rose recounts the emotional turmoil that she experiences upon learning that she must leave her home on rue Childebert because it is one of the thirty streets that will be completely razed to build the Boulevard Saint-Germain. Inspired by Charles Marville's old black and white photographs of an asymmetrical yet charming city, de Rosnay urges her readers to consider the price that former inhabitants had to pay "to air, to unify and to beautify" Paris.

For those of you who are fans of Mrs. de Rosnay's bestselling novel, Sarah's Key, you may like to know that the author wholeheartedly endorses the recent movie version of her book starring Kirsten Scott Thomas. Prior to making the film, the director assured her that he would not harm "her Sarah" and de Rosnay affirms that he was true to his promise. I'm happy that I haven't seen it yet because now I'll know to watch for the author in the restaurant scene, where she is seated behind Kirsten Scott Thomas.

If you can't wait until February to read Tatiana de Rosnay's latest novel, it is already available in French under the title, Rose.

As mentioned in previous posts, author events are a wonderful way to spend an evening in Paris. Be sure to visit the American Library's website or sign up for their e-newsletter to learn more about future programs. 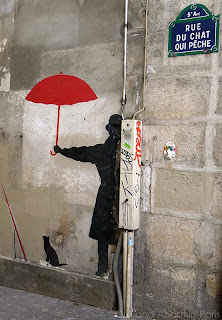 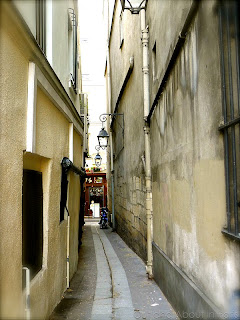 Dating back to 1540, the Rue du Chat qui Pêche (Street of the Fishing Cat) in the 5th arrondissement escaped Baron Haussmann's reshaping of the capital. Considered by many to be the narrowest street in Paris, it measures 5.9 feet (1.8m) wide and 95 feet (29m) long.
Labels: American Library in Paris author events Baron Haussmann books Haussmann and the Making of Modern Paris Sarah's Key Tatiana de Rosnay