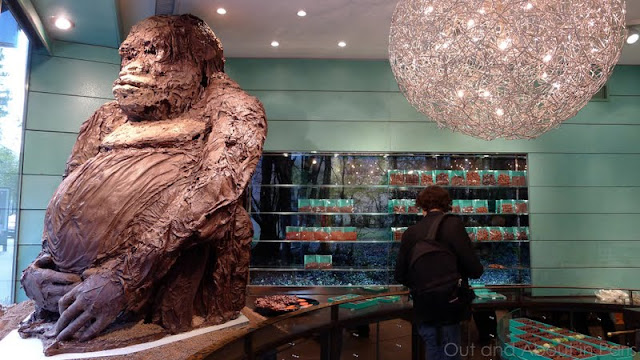 Whether you're strolling down the Boulevard St. Germain or  perusing the delectable creations in Patrick Roger's boutique, this 2,200 pound (one metric ton) gorilla is pretty hard to ignore. And believe me, after my feeding frenzy on Monday, the last thing that I wanted to see was more chocolate. But there he was, beckoning me to come in and take his picture. How could I refuse? As it's rude to just pop into a store and snap a photo, I made a token purchase and was told that the gorilla is part of the theme for the summer. It turns out that chocolate artist Patrick Roger is also an animal conservationist who is promoting the protection of endangered species, such as gorillas, orangutans and elephants. I was feeling better about my purchase already!

What else is made out of chocolate in Paris? 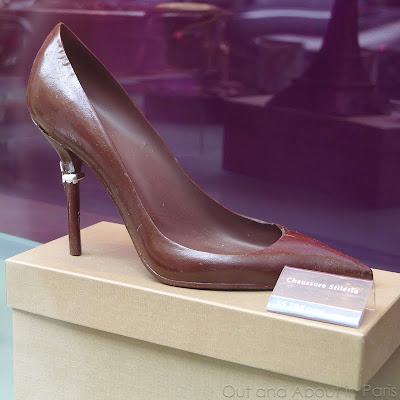 Jean-Paul Hévin makes a chocolate stiletto that is as fragile as Cinderella's glass slipper and less expensive than a pair of Louboutins! At first glance, I seriously thought that this was a real stiletto and wondered why a chocolate maker was in the shoe business. Admittedly, it wasn't one of my shining moments, but it is a testimony to how real it looks. 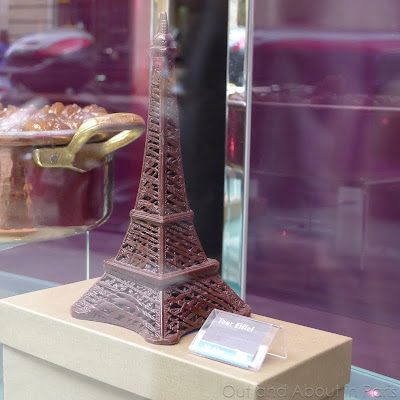 What would Paris be without the Eiffel Tower? Here's a chocolate one made by Jean-Paul Hévin that you can pack in your suitcase and enjoy at home. 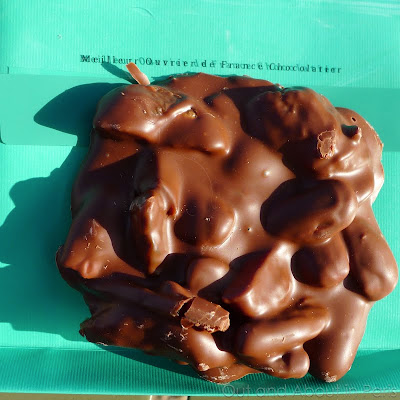 And finally, here's a photo of my token purchase at Patrick Roger's boutique. Chocolate and a mixture of dried apricots, ginger and nuts. It probably tastes much better than the one ton gorilla!

Both Jean-Paul Hevin and Patrick Roger have a number of boutiques in Paris. I visited the following: