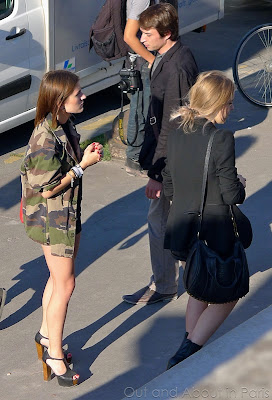 It's Fashion Week in Paris. The streets in front of all of the ritzy hotels are clogged with sleek chauffeur- driven cars with tinted windows, the Place de la Concorde and the Tuileries Garden have sprouted massive tents and the Twitter feed is all about the "beautiful" people who have invaded the city. [Side note: there was also a Jimmy Buffett sighting. Apparently, he's still in town after a concert last weekend and was spotted walking his dog down Avenue George V.] Having heard that much of the action takes place near the Tuileries Garden, I headed in that direction with a visit to the Louvre as my Plan B yesterday afternoon.

In case you're looking for an obvious connection between Fashion Week and the Louvre, there isn't one. But here's why I linked the two together in my mind -  when Joseph recently asked if I had written a post about the Louvre because he had just read an interesting article about it in the New York Times, I realized that 30 years is an embarrassingly long time to postpone my trip to the world's most visited art museum and decided to make it a priority...if I didn't get distracted with taking photos of leggy models along the way.

When I arrived at the Tuileries Gardens, it looked as if most of the fashionistas had already left one show and were on their way to the next, so I switched to Plan B and was inside the Louvre within a matter of minutes. No lines, no hassles. Even better, I managed to spot two of the most famous women in the world who have been around for a lot longer than any of the five minute wonders on the runway.

The Devil Wears Prada with Meryl Streep is a fun movie about the world of fashion.
Paris fashion week: Prêt-à-porter schedule Spring/summer 2012

Is this my post about the Louvre? No, there's more to come on that subject!