Shopping at the Maille boutique in Paris: Is it caviar or mustard?


Normally the thought of shopping for condiments doesn't excite me, but when Stephane mentioned that we were out of mustard I jumped on the task of replenishing our supply because it meant that I finally had a reason to visit the Maille boutique near the Madeleine Church. Even though I've peeked through the window when the store was closed, I had no idea that the shelves would be stocked with such an overwhelming array. Pistachio and orange, dried apricot and curry, grilled onion and wild thyme -- who knew that mustard could come in so many enticing flavors? Evidently the American woman behind me in line felt the same way because when an unintentional "Wow!" escaped from her lips, I turned and agreed that I had never imagined such a wealth of mustard. For someone who grew up in the land where French's ruled supreme, this was a culinary revelation. 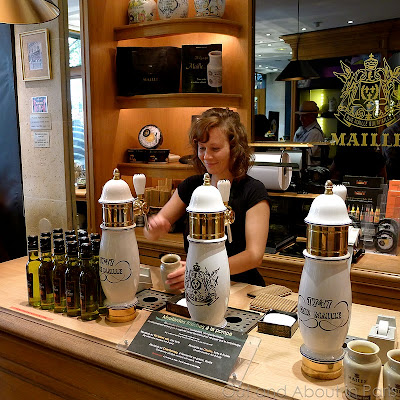 After sampling the three different types of mustard that are "on tap" and sold in refillable pots, I took 200 grams of white wine vinegar and the traditional Burgundy Chardonnay whole grain mustard. When the pots are empty, I'll simply wash them and take them back to the Maille boutique for a refill. I love it when something is delicious and environmentally friendly, too! 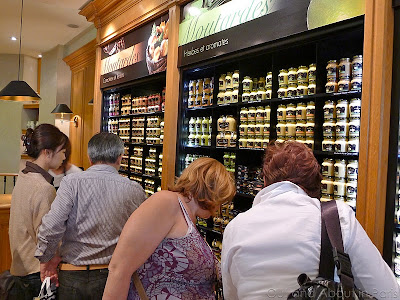 Deciding on the two types of mustard in the pots was easy because I could taste them. Choosing four small jars to to put in gift boxes turned out to be more of a challenge, so I asked the saleswoman for some help in selecting from amongst the more than 30 different flavors. When I asked for their most popular ones, she proposed the fig and coriander with lamb chops and pork dishes, the dried tomato and Espelette pepper with red meat and fish, the green herbs with fish, and the blue cheese with red meat.


In addition to more than 30 different kinds of mustard, the boutique also has a large selection of their other products, including oil, vinegar and pickles. 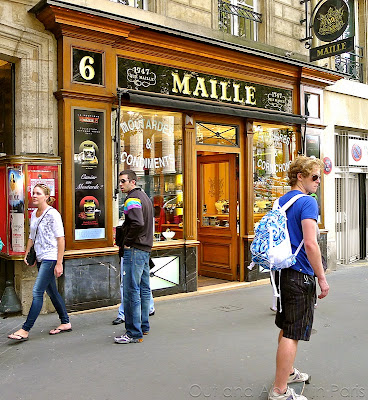