How some Parisians see their city - a different kind of map 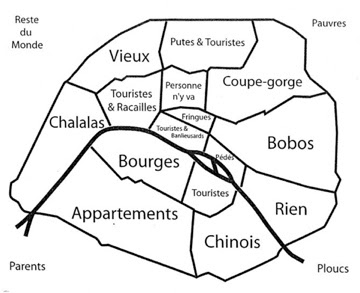 Perhaps one of the things that I love the most about Paris is that I can enter the metro station in my rather sedate neighborhood (Chalalas), go for a short ride and pop up someplace else where the sights and sounds are completely different. If I feel like eating Japanese udon noodles I take line 8 to Opera, if I want to buy a colorful sari I take line 4 to Gare du Nord and if I need some obscure ingredient for a Chinese recipe I take line 7 to Porte d'Ivry.

So, when Joseph asked a question about the location of the Ganesha Festival last Sunday, I was reminded of the above map that shows how some Parisians see their city. It's a knock-off of the map of New York that was created by Maira Kalman and Rick Meyerowitz for the December 10, 2001 cover of The New Yorker.

Starting at the top right and going in a clockwise direction, here are the translations: