Where in the World is Jim Morrison's Bust? - It's not at Père Lachaise Cemetery 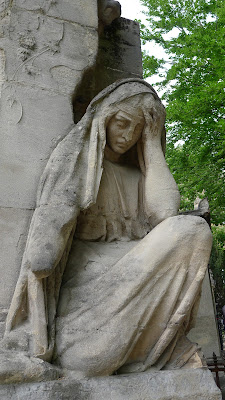 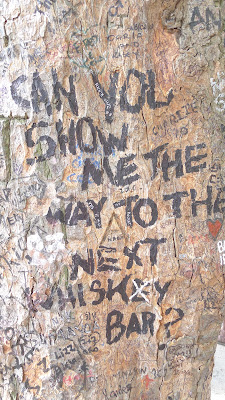 While visiting Pere Lachaise Cemetery last Sunday, I was dismayed to learn that the bust that used to mark Jim Morrison's grave is missing.  Who would have stolen a bust from a dead man's grave?  I'm also upset because it's as if a chapter of my own history has disappeared with it.  For years, I've been regaling my husband and children with the story of how, during my first backpacking trip around Europe, my brother and I made the pilgrimage to Morrison's grave on a cold rainy day in June.  Mixed in with the photos of beer halls and dingy hotels in the scrapbook commemorating that trip is a picture of Morrison's grave, adorned with red roses and the bust...and now it's gone.  All that remains is a rather nondescript grave and graffiti marked trees, including the one above with a line, complete with a spelling correction, from one of The Door's well-known songs.

Jim's missing bust serves as an appropriate metaphor for Père Lachaise, where our French tour guide spent three hours telling us about the lives of the famous and beloved actors, authors, scientists, and singers who, along with approximately 1 million other inhabitants, are now permanent residents of the cemetery.  Well, they are long-term residents if they purchased a perpetual plot, which now sells for Euros 11,500, and if the tomb is maintained.  As soon as it falls into a state of disrepair, the inhabitant is evacuated to make room for a new arrival.

Père Lachaise, which at 44 hectares (109 acres) is the largest park in Paris, wasn't always a desired final destination for the city's elite.  It was created when Napoleon Bonaparte, in an effort to rid the city of the disease infested cemeteries, decided to build three new ones outside the walls of the city.  When the government discovered that no one wanted to be buried in such an unprestigious location, they started a marketing campaign and moved the bodies of Moliere, Fontaine, and Balzac to their new resting places.  Their plan worked for Père Lachaise is now the most famous cemetery in Paris.


Rather than wandering around the extensive grounds of Père Lachaise on our own, I'm pleased that we went on a tour with a very knowledgeable guide.  I'll be sharing a few more stories about some of the more famous inhabitants in future posts.  With beautiful views of Paris, lots of trees, and an air of peaceful serenity, Père Lachaise is not a depressing place.  I'm already planning to do another visit with an English speaking guide because it's such a fascinating repository of history.

Click here to visit the Jim Morrison's Paris website. It has lots of interesting information, including a self-guided tour with an interactive map and a FAQs section about Jim's last days in Paris.

A YouTube clip of "People are Strange" by The Doors, dedicated to the person who stole Jim Morrison's bust.