Mary Kay: One of the most difficult things about being a global nomad is that our two children live on a different continent. They can't pop in to share a piece of good news, or for lunch on Sunday, so we were very pleased that our daughter, Sara, was able to take some time off from problem sets and lab work to visit us in March. At that time, this blog was a mere germ of an idea, so I'm thankful to Sara for both writing the following post and for giving me the encouragement that I needed to jump into blogging. 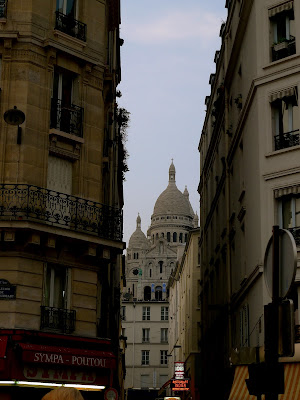 Sara:  Going to Paris is like watching your favorite movie; you fall in love with it the first time and love it just as much on the 100th viewing. Like watching your favorite movie over and over again, there are places in Paris I visit every time I go. Montmartre is one of those places. Ok, so it’s always full of tourists. But there’s a reason why. Whether you go in the middle of a sunny day and have a picnic on the stairs leading to the Sacre Coeur, or go just before sunset and battle the crowds for one of the best views of the sunset in Paris (the view from the Centre Pompidou is also excellent) it will take your breath away. 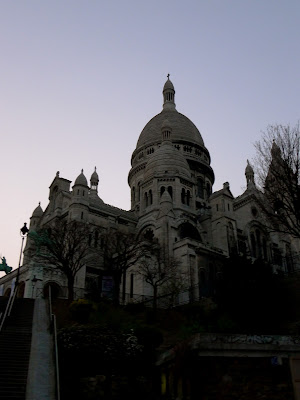 So, when my parents moved to Paris and I got an opportunity to visit them over spring break, Montmartre was, of course, on my itinerary. My best friend from university, who lives in London, also decided to join me for the weekend. I was shocked when he told me he got tickets for the Eurostar for only 70 pounds and even more shocked when he told me it only takes 2.5 hrs. Jonas left London after work and arrived in Paris at 18:17, just in time for dinner.
As Montmartre is only a short walk from the Gare du Nord, we decided to see if we could catch some of the sunset before getting dinner. The gates to the park around the Sacre Coeur were closed when we arrived – probably a good thing as it meant we could avoid being harassed by the multiple vendors in the area. Instead, we took the round-about way and made it to the top just in time to see the mass exodus of the sunset-watching crowds and catch a last glimpse of dusk-lit Paris. 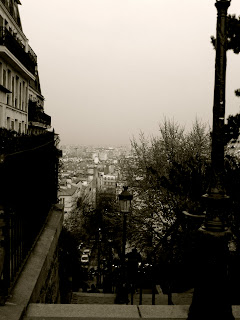 Earlier, on our hike up, it had occurred to me that maybe Montmartre wasn’t the best place to look for dinner – after all, its FULL of tourists and if my travels have taught me anything its that touristy areas and good food usually don’t mix. Nevertheless, I decided to call my mom and see if she could dig anything up on the internet (ah, the marvels of modern technology). Ten minutes later my personal interactive guide to Paris had responded with a list of places and a particular recommendation to try Chez Toinette, which had received rave reviews on Trip Advisor. As it was a Friday night, I decided not to take any chances and called the place to make a reservation. Just to be safe I asked for an 8:00 table and then realized 7:30 might be slightly more convenient so asked whether 7:30 would work. The voice responded promptly, but in good humor, that “8:00 would work for them”. 8:00 it is.

As it turned out we didn’t quite need reservations. We arrived at almost the same time as an Italian couple who were seated immediately but cautioned that they could only have their table until 9:45 when it would be required by someone else. The Italians laughed and said that an hour and 45 minutes would be more than enough time for them to enjoy their meal. Unlike in the U.S. where efficiency and mass service are the goal, in France you are effectively renting your table for the night –so feel free to sit as long as you like (they won’t even bring you the bill until you ask for it).


The meal I had at Chez Toinette was by far one of the best meals I had during my entire week-long stay in Paris. Add to that the friendliness of the waiters and the cozy atmosphere and I'd found myself a place I was longing to return to the minute I left the table (ok, perhaps not the minute I left as I was exceptionally full, but I was definitely already feeling the nostalgia on the metro ride home). Jonas and I (and, as it turns out, the Italians whom we were virtually sharing a table with) got the duck appetizer to share. The duck was cooked to perfection and arranged artistically around a bed of arugula (rocket) salad - if only I'd had the foresight to take a picture! Mmmmmm, it almost melted in my mouth.


Determined to optimize our main course options, Jonas ordered the lamb and I the fish which we split half and half. Both were amazing, but it had been a long time since I'd had such perfectly prepared fish and even longer since I'd had to dissect my fish from the bone! I would definitely recommend it to any seafood lovers! Although we were near bursting, we couldn’t resist ordering a dessert and the crème brulee that was brought to our table was well worth it. Jonas and I left Chez Toinette full, but content, ready to venture past the eclectic night life in Montmartre to reach the Pigalle metro stop. Next time I come to Paris I may be visiting Montmartre simply for Chez Toinette instead of the view from the Sacre Coeur! 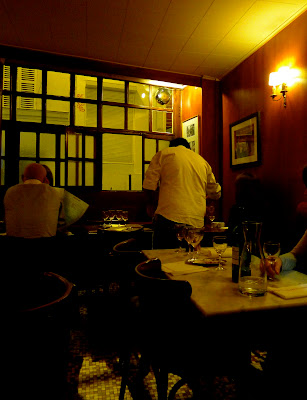