Charlie on the Quai - Vevey, Switzerland

If you’ve ever been to Vevey, chances are that you have a photo of the statue of a slim man wearing a bowler hat and oversized shoes. His dapper pose and friendly appearance invite you to slip your hand through the crook of his arm, as if you’re walking along the Quai Perdonnet with a close friend. That's how the people of Vevey feel about one of their most beloved residents, Charlie Chaplin, who lived with his wife, Oona, the daughter of the dramatist Eugene O’Neill, and his children at the Manoir de Ban in nearby Corsier from 1953 until his death in 1977. Sir Charles and Lady Oona Chaplin are both buried in the cemetery in Corsier.
To pay hommage to Charlie Chaplin, local chocolatier Blaise Poyet makes shoe-shaped Charlie Pralines that are sold in a package resembling a film canister. Speaking of chocolate, it's time for me to go do a bit more "research" for tomorrow's post. 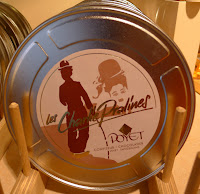 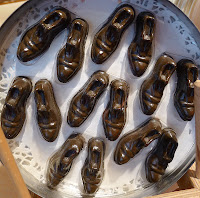