Behind the Scenes at Roland Garros, Home of the French Open


I'm just going to come right out and admit it -- I have a love-hate relationship with Roger Federer.  Sure, I admire his sheer Swissness, his ability to remain calm under immense pressure, and his gentlemanly demeanor, both on court and off.  But Roger, as he is affectionately called by my Swiss husband, has managed to derail a few of our vacation plans, such as the time that our visit to Scotland coincided with Wimbledon, which meant that we ended up sequestered in the room of our B&B marvelling at Roger's technique instead of enjoying the local countryside.

So, you can imagine my husband's delight when I suggested that we go for a behind the scenes tour of Roland Garros last Saturday.  Even though it isn't the scene of Roger's greatest victories, we still felt fortunate to get a spot on the last tour of the day, which was also the last tour until June 15.

With a viewing audience of 2.6 billion over a period of two weeks, Roland Garros is the most viewed tennis tournament in the world.  After hearing that the journalists receive free massages, I'm trying to figure out how to get a press pass to join the ranks of the 1,300-500 journalists, hailing from 80 different countries, who come to Paris to cover the event.  Does anyone know of a small country that would welcome live reports from the massage room, I mean from center court? 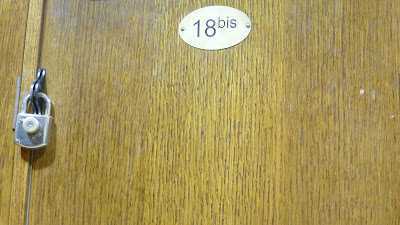 Unfortunately, we weren't able to see locker numbers 159 and 201, the lockers that are requested by Rafael Nadel and Federer respectively every year, because the floor of the men's changing room had just been polished.  We were, however, able to visit the women's changing room, where there is a locker number 18 and 18bis but not a locker number 19, the door of which was given to Steffi Graf to commemorate her six wins at Roland Garros.  Locker 18bis, the locker that replaced number 19, has become a sort of a shrine visited by female players who hope that a bit of Graf's luck will rub off on them.

More pictures from behind the scenes:


As we didn't think to get tickets in advance for this sold-out event, we'll be watching it at home from May 22 to June 5 and cheering "Allez Roger".

Click HERE for the official site of Roland Garros 2011.