Accessibility in Paris - Headed in the Right Direction! 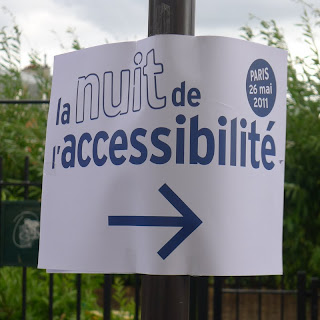 I'm feeling rather tired and in need of a strong cup of coffee this morning because I was out way past my bedtime last night going from restaurant to restaurant and from bar to bar with Vassilia, Alfredo, and Jean-Michel.  Was there some sort of Parisian pub crawl or celebration?  No, we started out the evening as four strangers who had volunteered for the first Accessibility Night in Paris and parted as members of a team who had a fun time together identifying some of the places where physically challenged people can enjoy a night out with their friends in Paris.
The evening began with a brief explanation of which factors, such as the width of the door, the type of door, and most importantly, if there are steps in front of the establishment, determine the accessibility or inaccessibility of a restaurant.  The event organizers told the 300 volunteers that the three main goals were to check accessibility, to inform the restaurant owners about the need to make their establishments accessible, and to register all of the accessible locations on the Jaccede website.  They added that while it is important for physically challenged people to go shopping and to go to the bank, it is equally important for them to go to the cinema or to a restaurant with friends rather than sitting at home alone. 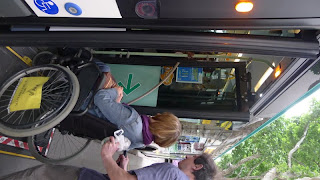 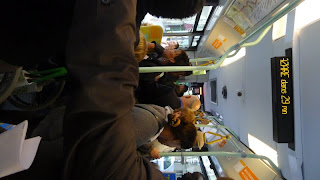 Armed with a kit that included a measuring tape, forms to rate the accessibilty of those establishments that we were assigned to visit, and informative pamphlets for the business owners, we headed out onto the streets of Paris.  The first challenge arose when we realized that Vassilia, who volunteered to be the wheelchair bound member of our group, wouldn't be able to take the metro.  We ended up missing the first bus that passed because it took us awhile to navigate the poles next to the curb cuts and to cross the street, but we managed to squeeze onto the second bus.  Imagine trying to fit a wheelchair onto an already overly crowded bus and you'll get an idea of just how daunting Paris can be for physically challenged people.

Arriving at our destination, rue de Faubourg Saint-Denis and rue des 2 Gares, we started looking for restaurants and bars to visit.  Finding places that Vassilia could enter proved to be yet another challenge.  The steps in front of most of the restaurants made them impossible to enter with a wheelchair.  We quickly found out that it isn't much fun to be on the outside looking in. 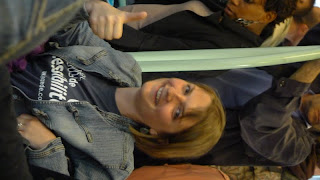 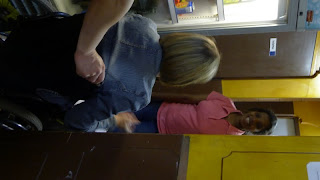 Vassilia on the bus and trying to access the bathroom.
On a more positive note, all of the business owners with whom we spoke expressed an interest in making their restaurants more accessible.  One man proudly showed us a removable steel ramp that he placed at the entrance to provide access for Vassilia, but the ramp's overly steep incline flipped the wheelchair backwards and could have caused Vassilia to have a concussion if we hadn't grabbed the handles of the wheelchair before she hit the ground.

Jean-Michel, who unexpectedly had a stroke the day after he returned from a vacation when he was 41 years old, spoke about the difficulties of being handicapped in Paris.  The doors are awkward to open, the toilets are tiny and largely inaccessible because they are usually located in the basement, and most Parisians don't want to change the pace of their daily rhythm to accommodate a physically challenged person.  Opting to walk of the left side of the road, Jean-Michel explained that it's easier for him to be on that side because the slope of the sidewalk works with his disability rather than against it.  Something that wouldn't have even occurred to me. 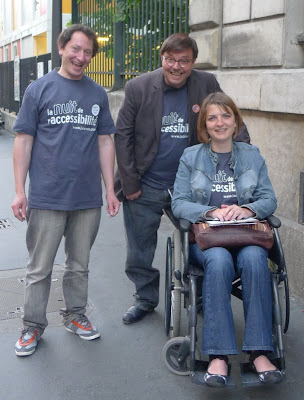 Many heartfelt thanks to fellow blogger, Adam, at Paris Weekends for helping to spread the word about this event! 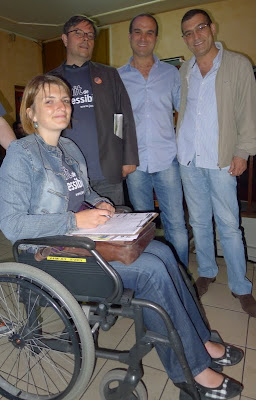 Vassilia, Jean-Michel, and two of the nice owners we met.
Labels: accessibility handicapped Jaccede Night of Accessibility night out in Paris physically disabled