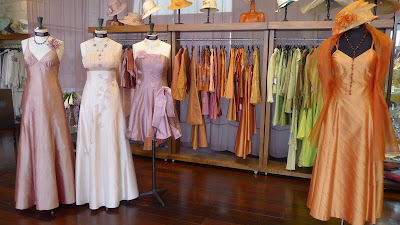 I'm not quite sure why, but when I signed up for the tour, Meeting with Aurélie Cherell, a Parisian Fashion Designer, I expected to meet a relatively inexperienced designer who was just starting out in the business.  So, it was a very pleasant surprise to arrive at Aurélie's spacious boutique at the Viaducs des Arts and to see her colorful collection of prêt-à-porter summer clothes.

Aurélie, who received her diploma from ESMOD Paris, worked for Galeries Lafayette and Printemps before moving to Toyota.  That's right, Toyota, the car company.  When we seemed confused about why a fashion designer would have worked in the automotive industry, Aurélie explained that she was hired to design the outfits worn by the hostesses at the international motor shows, galas, and expositions after submitting the award-winning design for a competition that was sponsored by Lexus, Toyota's line of luxury vehicles.  Aurélie has also designed dresses out of chocolate that were worn by celebrity models at five of the fashion shows at the annual Salon du Chocolate in Paris.  And, if you're a fan of Disney's animated movies, you may have seen her on the Disney Channel talking about the princess dress that she created for the eight year old girl, who was the voice of the young Charlotte in the film, The Princess and the Frog, to wear to the movie's premiere. 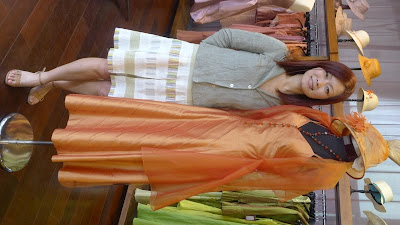 After explaining the steps that are involved in the design process, Aurélie said that all of her ready-to-wear collections tell a story, with a common thread connecting them from season-to-season and from year-to-year.  This cohesiveness allows customers to pair an Aurélie Cherell skirt from the 2010 collection with one of the vibrant blouses made out of Italian raw silk from the current season's prêt-à-porter line.  Aurélie, who believes that it's necessary to love life to be a successful fashion designer, said that what she sees around her frequently inspires her designs, such as the fairy like sprinkling of flower petals that adorn several of her ivory-colored, silk wedding dresses.

If your wedding plans include a made-to-measure dress from Paris, Aurélie recommends visiting the boutique at least four months prior to the date of your wedding, with a final fitting three weeks before the ceremony.  Prices range from 900 € for a cocktail length dress to approximately 5,000 €. 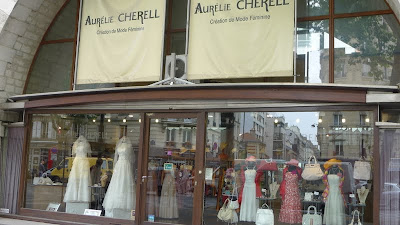