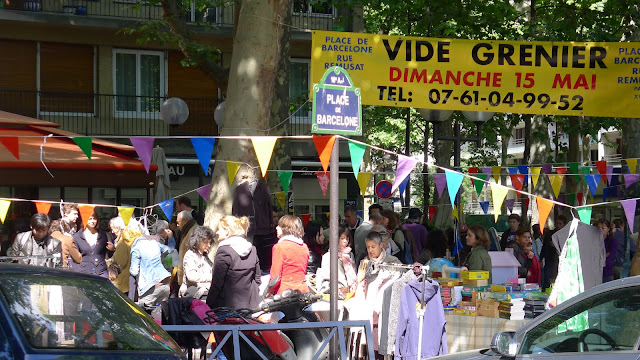 Yesterday morning felt like what Christmas mornings used to feel like when our children were small.  Stéphane had already taken his shower and was ready to go to the bakery for croissants before I remembered that it was a very important day, the day of the vide-grenier* near our apartment.  As he was itching with anticipation and I still wasn't dressed, I told him to go ahead and to give me a call if he saw anything of interest.  By the time that I had finished making my morning tea and was just starting to sit down, the telephone rang and Stéphane's enthusiastic voice was telling me that there was lots of stuff for sale and that I should hurry down.  Knowing that he tends to get overly excited by the sight of anything old, we agreed that he would look around a bit first and that we would go together after breakfast.  It wasn't long before Stéphane returned with a stack of French DVDs, which he was pleased to have bought for €2 a piece because he has decided that we should watch more French movies now that we're in Paris. 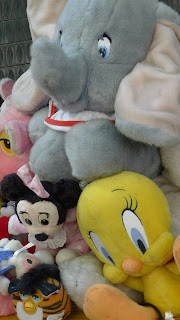 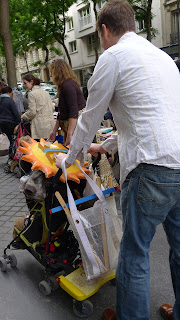 On our way to the vide-grener, we passed the early bird customers already heavily laden with their purchases of toys, paintings, and hula hoops and worked our way to a stand with several Ikea bags that were overflowing with scarves and hats.  Digging through one of the bags, I came across a Hermès scarf and decided that it was worthy of a photo.  While I was snapping away, I noticed that there was a women behind me just waiting to pounce on the scarf.  And sure enough, she snatched it up as soon as I released it and bought it for €1. 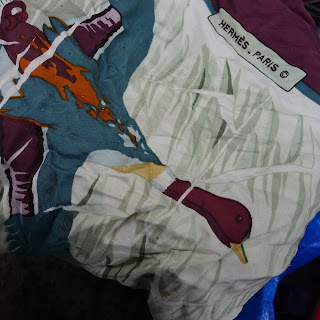 After buying a few other hand-painted silk scarves for €1 and regretting that I had missed out on the opportunity to own a Hermès scarf that I would never have worn because I didn't really like it and because the colors don't match any of my clothes, I went back to talk with the vendor of the scarf.  When I told her that I was disappointed that I hadn't bought it and asked if she had any others, she laughed and told me not to worry because it wasn't a real Hermès.  She went on to add that she had been amused by the woman's cunning attempt to hide the brand name from her when she bought it.  When I asked the vendor how she knew that it was a fake, she said that the quality of the stitching on the hem was not that of an authentic Hermès and that they are always made out of silk, whereas the fake scarf was made out of synthetic material.  Well, it certainly fooled me and the woman who went home with it! 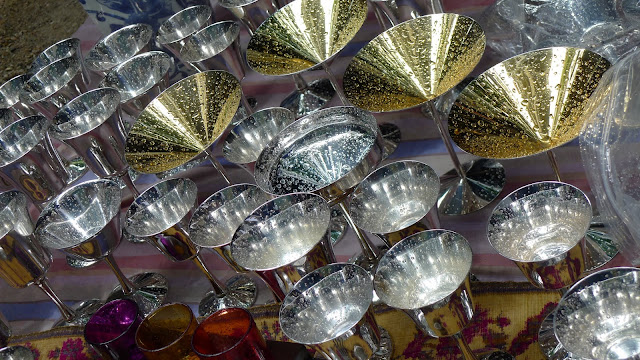 The good news is that the vendor who was selling the fake Hermès scarf has a store in the 18th arrondissement where I can go look for other treasures.  In the meantime, I'm going to visit a few more vide-greneirs.  Imagine streets lined with tables where families and merchants are selling clothes, toys, books, vinyl records, jewellery, accessories, and collectible items and you'll understand why Stéphane felt as if it was Christmas morning. 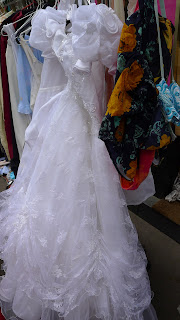 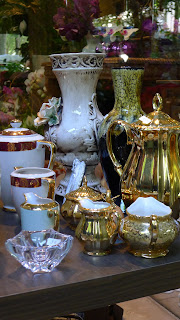 Bargains aren't hard to find in Paris, if you know where to look.  It's helpful to know these French words:

*vide-grenier - literally means "empty attic" and is the equivalent of a massive garage sale. In Switzerland, this type of community garage sale is known as "coffre-ouvert" because people bring their sale items to a specified place and open the trunks of their cars to sell whatever they have inside.

chiner - a verb that means to look for second-hand objects at flea markets and antique stores. 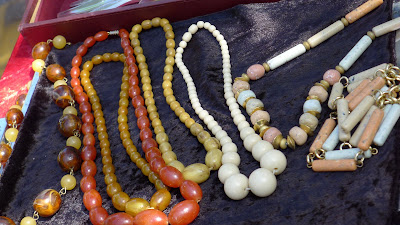