Lunch at Le Timbre, a Cozy Restaurant near the Luxembourg Gardens 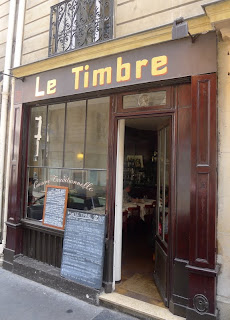 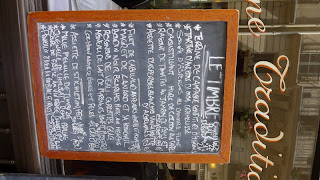 In spite of the plethora of restaurants in Paris, it's not always easy to get a table at the one where you want to eat, especially when it only seats twenty-four people, like the tiny Le Timbre, or The Stamp, in the 6th arrondissement.  Fortunately, luck was in our favor on Saturday. 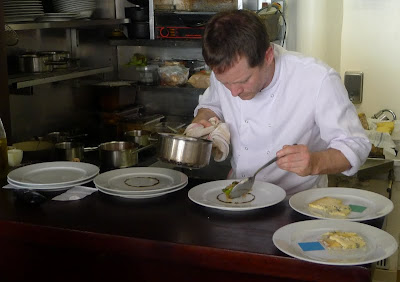 When we arrived shortly after one, the restaurant was already humming with the noise of satisfied diners who were exclaiming over each dish that chef Chris Wright lovingly prepared.  And it's obvious that Wright, who was born in Manchester, has a great affection for food because the tiny kitchen is visible from the restaurant, as are the wide range of expressions on Wright's face as he meticulously plates each dish.

Rather than using lots of fancy words to describe the enticing array of flavors, I'm going to let the photos of our meal help you decide if Le Timbre is a restaurant that you would like to try. We tried it, loved it, and have already made reservations to return with Stephane's family when they visit us in June.

I opted for the 26 € three-course lunch menu and had the terrine de campagne with onion jam, succulent Pyrenees lamb with stuffed pimentos, and chocolate dumplings with a praline cream. Even though Stéphane said that he was "only" going to have the cod that was served on a bed of green asparagus and Le Timbre's signature millefeuille for dessert, he ended up eating half of my terrine. I couldn't blame him though because it was irresistibly good. 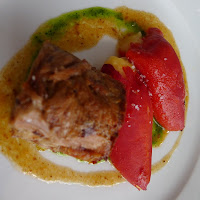 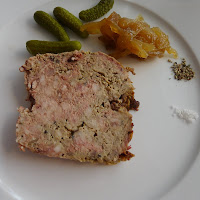 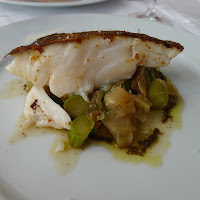 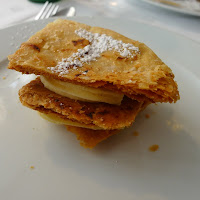 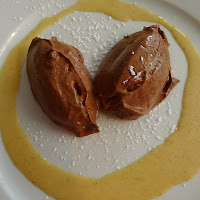 Reservations are highly recommended, especially since we noticed that quite a few people had the misfortune to be turned away while we were enjoying our lunch.  This restaurant would not be a good choice for people wanting to have an intimate meal because the seating is very tight and you're shoulder to shoulder with your neighbor.  We did, however, find that a camaraderie developed between the guests as they helped each other move the tables to make room for new arrivals.
Le Timbre
3 rue Sainte Beuve
Paris 75006
Tel: 01 45 49 10 40
Lunch: 12-2:00 pm, Dinner: 7:30-10:30 pm.  Closed Sunday and Monday.