The Story of Héloïse and Abelard - Connecting the Dots Between Pere Lachaise, the Sorbonne, and Vevey, Switzerland 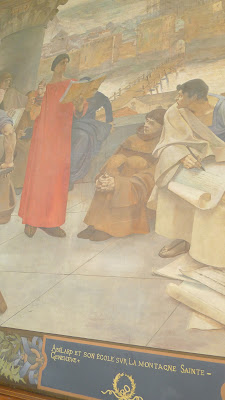 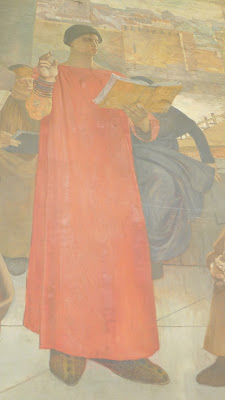 When Stéphane and I went on a tour of Pere Lachaise Cemetery a couple of weeks ago, I felt a bit out of the loop when the guide referred to Abelard and Héloïse, a couple who are entombed together, as if he were referring to two of his dearest friends. While the French people in the group nodded their heads knowingly, I took notes about Abelard and Heloïse's tragic love affair to share with you.
Pierre Abelard, who was born in a small town near Nantes in 1079, pursued a studious life that took him to Paris where he set himself up as a teacher.  When Abelard was thirty-eight and boarding at the house of Canon Fulbert, he fell in love with Fulbert's niece, Héloïse.  Passionate about the seventeen year old, Abelard neglected his other students and ended up impregnating Héloïse, which obviously meant that he had violated his vow of celibacy.  Knowing that his promising academic career would be over if he married Héloïse, Abelard proposed that they marry but keep the wedding a secret.  Needless to say, Uncle Fulbert wasn't pleased about the disgrace that Abelard had brought upon his family and had him castrated.  The distraught Héloïse went to a nunnery and eventually became the abbess of the Paraclete convent.
In the meantime, the castrated Abelard followed a circuitous route that led him to become a brilliant teacher at Mont Sainte-Geneviève in Paris, where he attracted hundreds, if not thousands, of students.  The mural in the Grand Vestibule at the Sorbonne shows Abelard surrounded by his adoring pupils. 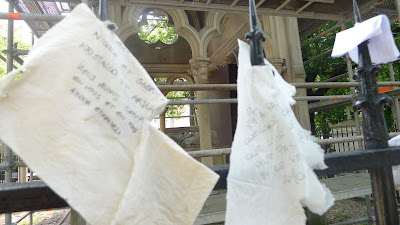 Héloïse and Abelard continued to exchange love letters until Abelard's death in 1142 and were buried in the same coffin after Héloïse death in 1164. Their bodies remained together for two and a half centuries until 1497 when a prudish nun separated their remains.  In a marketing effort to make Pere Lachaise Cemetery more appealing to the citizens of Paris, Napoleon had Héloïse and Abelard's bodies reunited in a crypt that has become a shrine where lovers from around the world leave letters pledging their undying love to each other.
My most recent encounter with the couple was during my visit to Vevey, Switzerland when my guide told me that Jean Jacques Rousseau, the Geneva born author who is buried as a national French hero at the Pantheon and is known as the great Rousseau, wrote the novel, Julie, ou la nouvelle Héloïse (Julie, or the New Héloïse), which is set in Vevey and recalls the story of Héloïse and Abelard. 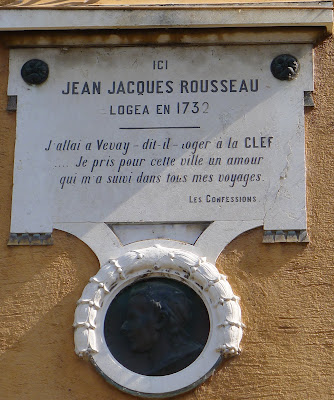