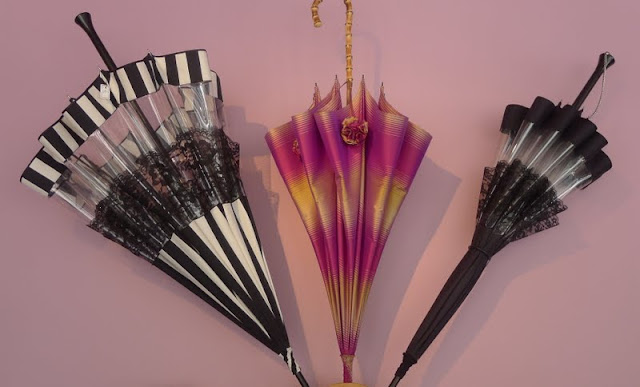 Drum roll, please.  I have an important announcement to make - I was wrong!  After writing a post a few weeks ago in which I incorrectly said that Pep's was the only umbrella repair store in France, several astute readers posted comments telling me that there is, in fact, another umbrella repair store in Paris.  The posters' enthusiasm for the work done by artisan Michel Heurtault made me realize that visiting Parasolerie Hertault should be a priority, so I made a trip to his atelier on Wednesday. 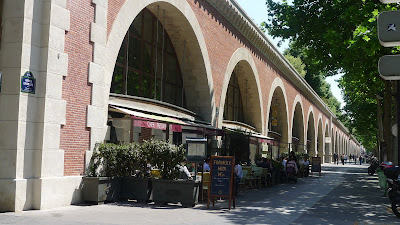 Michel's boutique is located at the Viaduc des Arts, a thriving art center that houses the workshops of fifty-two skilled craftsmen.  And while it is true that Michel is an umbrella repairman, it would be more accurate to say that the restoration of umbrellas and parasols is only a part of his business.

What was more exciting to me, since I don't own a parasol that is in need of repair, is that Michel designs parasols and umbrellas to suit the taste of each client.  Are you going to a wedding in the South of France in July and need something stylish that will keep you from wilting in the sun, then talk to Michel. He may propose a made-to-measure parasol in cream colored silk trimmed with Chantilly lace, or one in embroidered silk that matches the color of your dress. If you have a different idea, Michel will work with you to create a parasol or an umbrella that meets your needs.

Michel, who was recently featured in the New York Times, is used to taking a wisp of an idea and seeing it through to fruition.  Eliza Doolittle toted one of Michel's parasols in the recent theatrical production of My Fair Lady in Paris and Michel's parasols will adorn the arms of the actresses in the upcoming movie, Les Adieux à la Reine (Farewell, my Queen), which is about Marie Antoinette and the final days of the French Revolution. 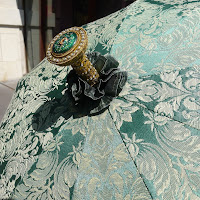 Right about now you're probably thinking about the excesses of the French Court during the reign of King Louis XVI and wondering if you can afford to purchase one of Michel's exquisite creations.  Like a handcrafted Swiss watch or a piece of art, a fashionable Heurtault umbrella or parasol will probably become a family heirloom, whereas there's a good chance that all of the inexpensive umbrellas purchased over the years will end up in the local landfill.  Prices start at 300 €, although Michel is currently designing a high quality model that will sell for 150 €.

Many thanks to the readers who told me about Parasolerie Heurtault.  I fully understand your enthusiasm for the quality of Michel's craftsmanship. 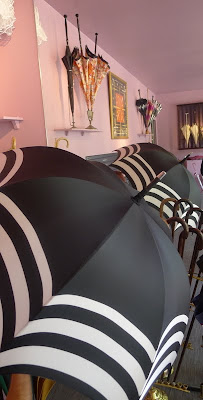