The State of my Shoes 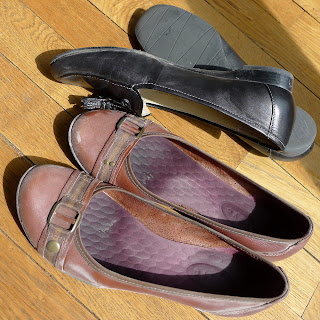 Before moving to Paris, I contacted a fellow American who lives in the same arrondissement and asked if she would provide me with a list of all of the important addresses.  Thinking that her list would include cheese stores, butchers, and bakers, etc., I was a bit surprised to see the address for not one, but two cobblers.  It seemed a bit odd, but I didn't give it much thought...until now!  A mere two months of living in Paris has wrecked havoc on my shoes.  And it's not that I'm not used to walking.  I walked to the grocery store, to the post office, and to just about everywhere else in Montreux, the small town where we lived in Switzerland.  I'm not a sloth.  It's just that I'm covering a lot more distance here.  I may follow the example of Thomas Jefferson who supposedly used a pedometer to keep track of the number of steps that he made on a daily basis while living in Paris.  In the meantime, the state of my shoes after a recent stroll through the Tuileries Garden is testimony to the wear and tear that they get here.

As the long thread titled, "Comfy shoes to wear in Europe for females" on the Paris Forum at Tripadvisor indicates, I'm not the only one who is thinking about shoes.  If your favorite pair needs new soles while you're in Paris, don't worry because there seems to be a plethora of cobblers.  Just take your shoes to a "Cordonnerie" and you'll be back on the streets in no time. 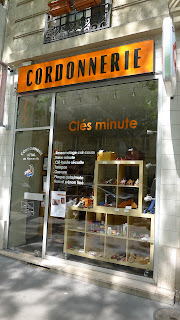 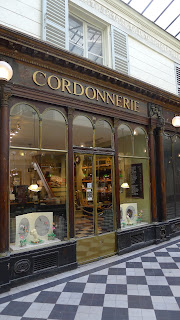