﻿Job description:  Duties will include entertaining a large and mostly mobile audience, who will be distracted and in a hurry.

Your salary will vary and depends greatly upon your ability to please your audience.

Oh, I should also mention that you'll be working in a windowless environment with rather bad lighting but good acoustics.


The RATP holds auditions every six months for artists aspiring to become one of the 300 official musicians of the metro. 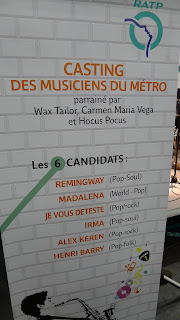 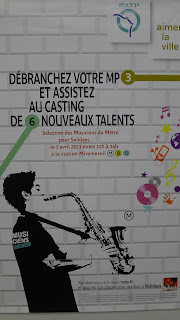 Six groups (Remingway, Madalena, Je Vous Deteste, Irma, Alex Keren, and Henri Barry) competed for the two top spots yesterday.  The groups had 10 minutes to play two songs, captivate the crowd, and convince the jury.
A Parisian moment: something magical happens when your ear detects the first muscial notes wafting through the maze of metro tunnels.  The sensation intensifies as you draw nearer and then pause, for a moment or two, to soak up the sounds, while the feeling of being alone in a large city disappears.


I invite you to have your own Parisian moment by listening to the YouTube clips featuring the artists that auditioned yesterday.
Labels: Alex Keren Je Vous Deteste Musicians of the metro Parisian moment Sunday's picture and a Song