A Sign of the Times - A Public Service Announcement 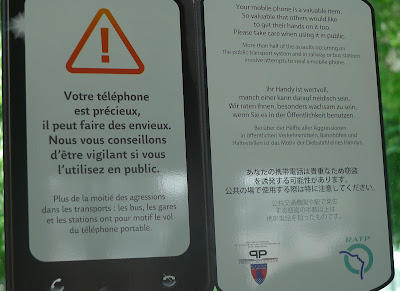 While riding the bus yesterday, I noticed this sign for the first time.  It caught my eye because it's fairly large and is in four languages, something that I haven't seen before in France.

You can click on the photo to enlarge the sign, but it basically advises people to be careful while using mobile phones because more than half of all of the assaults on the public transportation system in Paris involve mobile phones.  If I absolutely have to look at my phone while I'm on the metro, I make sure that it's only when I'm seated on one of the inside seats so that it's more difficult for a thief to snatch it and run away with it.
Labels: assaults insider's tip mobile phones public transporation system