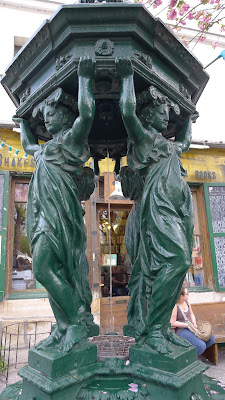 You've probably noticed them gracing the shaded squares around the city or on the Avenue des Champs Elysées, but you may not have given them much thought.  They're such an integral part of Paris that you expect them to be there, just like the Eiffel Tower and the long line of hungry people standing in front of  l'As du Falafal Restaurant in the Marais.


Sir Richard Wallace, an English philanthropist and Francophile, designed and offered the fountains to the city of Paris so that everyone, rich and poor, would have access to potable water.  Wallace decided that the fountains had to be tall enough to be seen from a distance, aesthetically pleasing, affordable, and made of weather resistant materials.  It was also decided that the figures of the four females, the caryatids, should be placed in such a way that it wouldn’t be possible for a horse to drink from the fountains, something that probably isn't as much of a problem now.

There are three different types of Wallace Fountains, including the most familiar large model with the four caryatids representing kindness, simplicity, charity, and sobriety.  One of Wallace's motivations for offering the fountains to the city was a desire to reduce the consumption of alcohol.
Is it safe to drink the water from a Wallace Fountain?  Yes, according to the official government website for the city of Paris.  The sound of the cool water flowing from the Wallace fountain behind my apartment has been refreshingly pleasant during these past days when it has been unseasonably warm.  The homeless people sleeping on the streets of the city must be thankful to have a source of potable water, just as the poor were when Wallace first gave the fountains to the citizens of Paris. 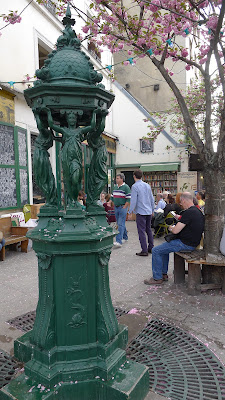