Another Way to Look at Art 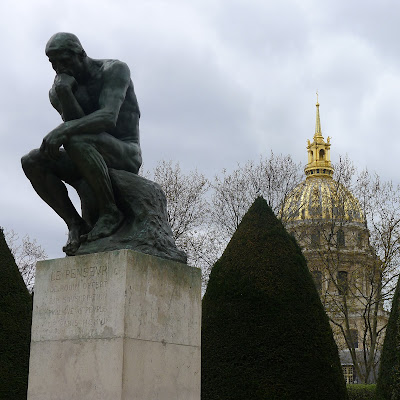 How would you describe Rodin's statue, "The Thinker", to a blind friend?  Which words would you use to convey the tautness of his muscles or his furrowed brow?

I was recently captivated by the smile on the face of a man who was feeling one of the statues near the Louvre.  Since I'm getting used to seeing all types of interesting behavior in Paris, it took me a few minutes to figure out that he was visually impaired and that he was using his hands to look at the statue with his wife.  Words cannot convey the expressions of sheer joy on their faces, their complete immersion in the moment, as they cherished the experience together...you would have had to see them to understand. 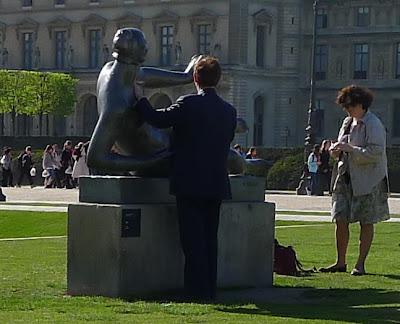 After writing a draft of this post a few weeks ago and noticing several other visually impaired people in the city, I started wondering if any of the museums offer tactile visits.  The Louvre's page for handicapped people seems to focus only on those with physical disabilities.  I can't imagine what it would be like to not be able to see all of the visual wonders of Paris.
Using the theme of water as their base, the French tour company, Percevoir, offers tactile visits of Paris.  One of the tours that they offer is "The Fountains by Feel/Touch".

Click HERE to see a thread with useful information, including the fact that there is a tactile gallery in the Louvre, for visually impaired visitors to Paris written by members of Trip Advisor's Paris Forum.
Labels: art blind Louvre street scenes visually impaired