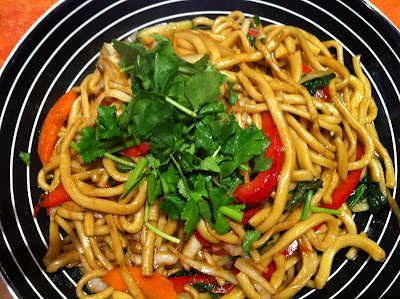 It was a bit cool, if not downright cold, during the "Paris Fashion Walk" yesterday, so I decided to treat myself to lunch at a Chinese noodle restaurant, Les Pâtes Vivantes, that I've been wanting to try as much for the show as for the food. The noodles are hand-pulled, an art that involves taking a thick rope of dough, pulling it, and then folding and refolding it until the dough miraculously turns into long, thin noodles. 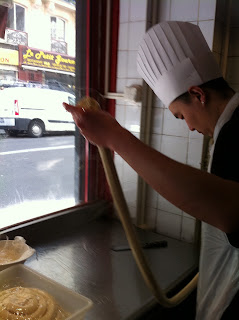 The Chinese woman, who I think was the owner of the restaurant, generously agreed to let me take photos of the chef pulling the noodles and then shared the following story with me:


You've heard about the Silk Road?  Well, noodles originated in China and when Marco Polo went there on vacation, he discovered them and brought them back to Europe. (That's it - the story of how noodles made it to the West as told by a Chinese woman to an American woman in French, so the facts may be a bit distorted.  I do, however, love the idea of Marco Polo vacationing in China!).
The saying on the back of the menu offers some good advice, just like a Chinese Fortune Cookie:
Noodles, the symbol of longevity,
above all else, do not cut them!
Rather savor them, along their entire length,
like life...
My fried noodles with vegetables were Euros 10.  With a complimentary carafe of water, it was an inexpensive, yet interesting, experience.