I love books, I really do.  I know that almost everyone says that they love books but after having lived in countries where I was reduced to reading the text on cereal boxes because English books were unobtainable, I have an intimate understanding of just how miserable life can be without them.

So, what does my love of books have to do with Paris?  Author events abound in this city renowned for its literary heritage.  In the five weeks since we moved here, I've had the great pleasure of listening to some amazing authors talk about their books, their characters, and their craft, including Peter Conradi, a co-author of The King's Speech; Amy Tan, the best-selling author of several books including one of my favorites, A Hundred Secret Senses, and The Joy Luck Club; and the fascinating French author, Patrick Weil, who posed the question, "Is there such a thing as French national identity?". 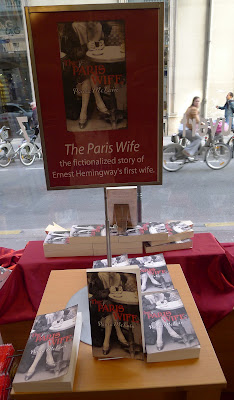 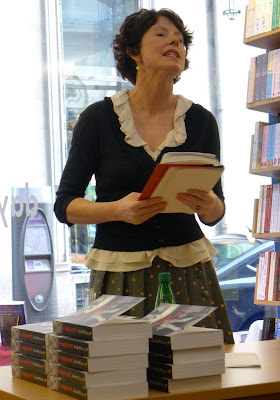 Last night, WHSmith hosted a talk by Paula McLain, the author of the New York Times bestselling novel about Hadley Hemingway, The Paris Wife.  After poring over the 2,000 love letters that Hadley had written to the young Ernest, McLain said that she saw a side of Hemingway that was deeply likable and one that we don't see during his later years.  Her Hemingway is young, insecure after being wounded during the war, and at the start of his career.  I'm looking forward to reading the book and being transported back to Paris in the 1920s.

If you're visiting Paris on your own, author events are an entertaining way to pass the early part of the evening before dinner.  The audience seems to be a mixture of English speaking expats, a handful of French people, and perhaps a few tourists.  Another plus is that some of the bookstores offer a glass of wine and the opportunity to mingle with the other guests while the author signs books.

Additional information on upcoming author events can be found at the websites for The Village Voice, WHSmith, Shakespeare and Company, and the American Library.

Thought for the day:  Why don't we use the word "misogynistic" anymore?  Have American men changed to the degree that it's no longer applicable?  Is it just too difficult to pronounce?  Two different French women used the French equivalent, "misogynes", while talking with me about men last week.  It seemed to be coincidental, until I heard it again last night when Paula McClain said that many women think that Hemingway was misogynistic.