If you're looking for an example of over-the-top opulence while you're in Paris but don't have time to go to Versailles, visit The Palais Garnier, which was built on the orders of Napolean III and took 15 years (1860-75) to complete.

It's possible to visit the Opera House on your own, but we found that the guided tour really enhanced our visit.  The stories recounted by our guide helped us to better understand the culture of the 1870s, when the wealthy citizens of Paris would go the opera to see and to be seen, usually 3-4 times a week.  Standing on the Grand Staircase, it's easy to imagine the chatter that would arise as the ladies, bedecked in diamonds, inspected the latest arrivals and gossipped about the men who were accompanied by their mistresses instead of their wives. 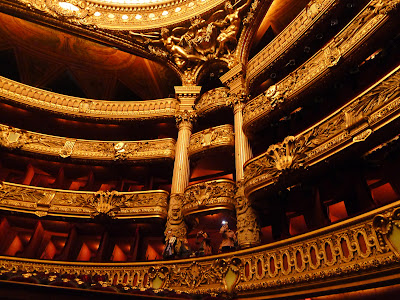 Since the auditorium was not being used for rehearsals at the time of our visit, we were able to relish the luxury of sitting in the red velvet seats on the ground floor, a place historically reserved for the men because the women's crinolines were too large to allow them access, while our guide entertained us with tales of the Opera's past.  For example, the small partitioned rooms lining the sides of the Opera are called "les baignoires", or the baths, because the gas heating caused them to reach stifling temperatures.  They were a favorite of people, such as widows, who were not supposed to be seen at the Opera...but who yearned for the entertainment of seeing others and who didn't want to miss out on the latest gossip.  Remember, this was in the days before television and reality shows.

I wish that I would have seen the movie, Jefferson in Paris, before visiting the Opera House because there is a scene that gives a good idea of what it would have been like to attend the opera during the time that Jefferson was the American ambassador to France.  The performance on stage was truly less important than what was happening in the audience.  That's why the individual boxes for the Emperor and the Empress (yes, they had separate boxes) are located on either sides of the stage instead of in the center. 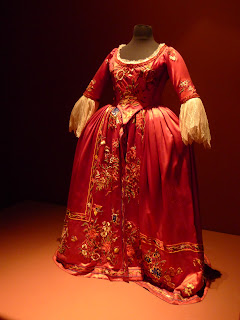 Helpful hints:  The Opera Garnier is open for self-guided visits every day.  Guided tours, which I would recommend, are offered every Wednesday, Saturday, and Sunday, with the exception of July and August when they are offered every day.  Please click HERE to check their website for changes to the schedule and for additional information.  Be sure to arrive early for the guided tours because there is a high demand for them.