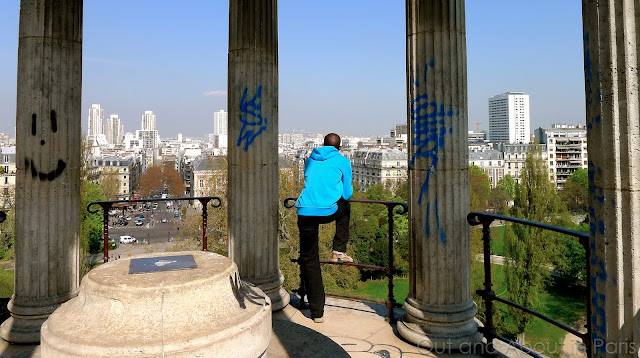 While there's nothing wrong with the view of Paris from this side of the gazebo in the Buttes-Chaumont Park, I've got to admit that I prefer the vista from the other side. Glistening like a mirage in the distance, I recently learned that Sacré-Coeur Basilica is constructed out of Château-Landon stones that release calcite when it rains. A natural whitener, this mineral has helped the Basilica maintain it's pristine appearance ever since it was consecrated in 1919. 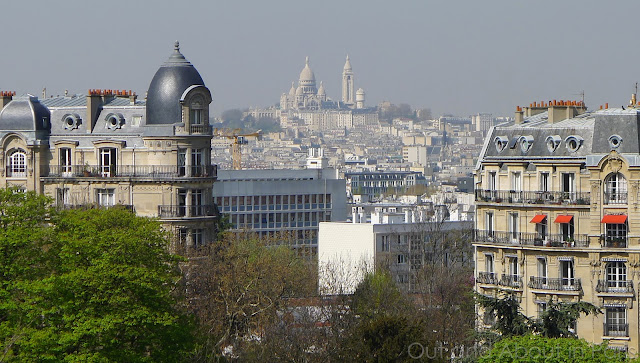 Whether you go for a picnic lunch, a stroll or simply sit and read a book, the Buttes-Chaumont Park  is one of the most beautiful spots in Paris. With rolling hills, a grotto, an artificial lake, a roaring waterfall, a suspension bridge and a gazebo that resembles the Temple of Vesta in Tivoli, Italy, I felt as if I was on a mini-vacation from the hustle and bustle of the city on Tuesday afternoon. 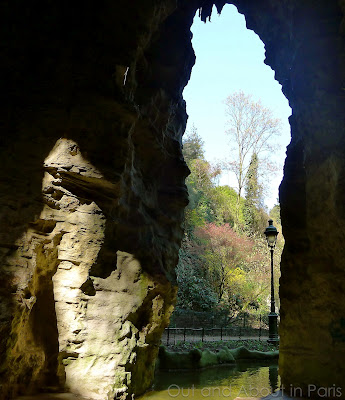 In between bites of couscous salad and artisanal potato chips purchased at a nearby shop, Mais Oui Paris and I admired the "People's Tuileries" that Napoleon III created for the underprivileged citizens of Eastern Paris in 1867. Built on the site of disused gypsum quarries, the 1963 Les Guides Bleus: Paris describes Buttes-Chaumont as "certainly one of the most pleasant and unexpected parks of the capital", while the 2011 Paris by Rick Steves doesn't seem to mention it at all. What an oversight.

If you haven't been to Buttes-Chaumont, grab a picnic and go! Please click here to see photos from my April 2011 visit.