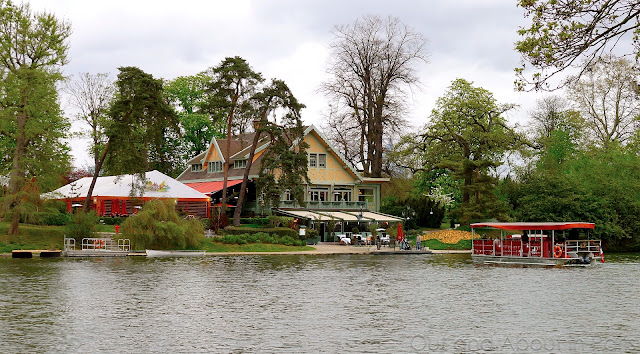 A lake + a chalet + a log burning fire = Switzerland. Right?
That's what Stephane and I first thought as we walked along the narrow dirt path skirting the lake and saw Le Chalet des Iles, an authentic chalet given by Napoleon III to his wife, the Empress Eugénie. The Swiss chalet, which was disassembled, transported to Paris and rebuilt on an island during the redevelopment of the Bois de Boulogne in the 1880s, is reachable by a small boat that traverses the lake. Had the weather been more conducive to being outdoors, we would have rented a wooden rowboat and traveled in style - with Stephane at the oars, of course! 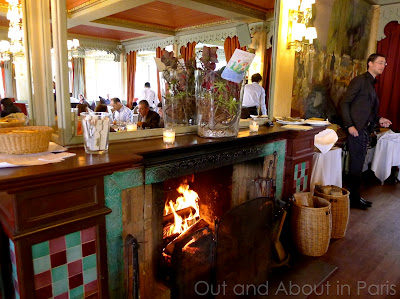 As it was, it felt good to take refuge inside next to the wood burning fire. Sitting in the cozy room gazing out at the lake, I thought that it's little wonder that Le Chalet des Iles was fashionable during the Second Empire when it was a literary salon frequented by French authors Marcel Proust and Émile Zola.

Surrounded by large French families gathered together on Easter Monday, Stéphane and I agreed that it's the perfect spot for special celebrations. While the food wasn't the best that we've had in Paris, the idyllic surroundings more than made up for any shortcomings. We're already planning to take some visitors there in June. 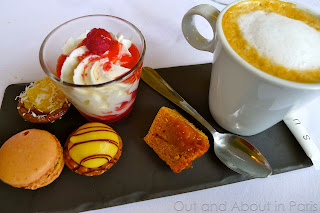 Our lunch ended on a very sweet note with a café gourmand, a gourmet coffee served with a macaron, lemon tartlet, mascarpone flavored with coconut and a raspberry coulis and some other delectable goodies.

Dads' day on the lake - some fathers rowed and others took it easy.