La Butte aux Cailles - I can't wait to go back on a sunny day! 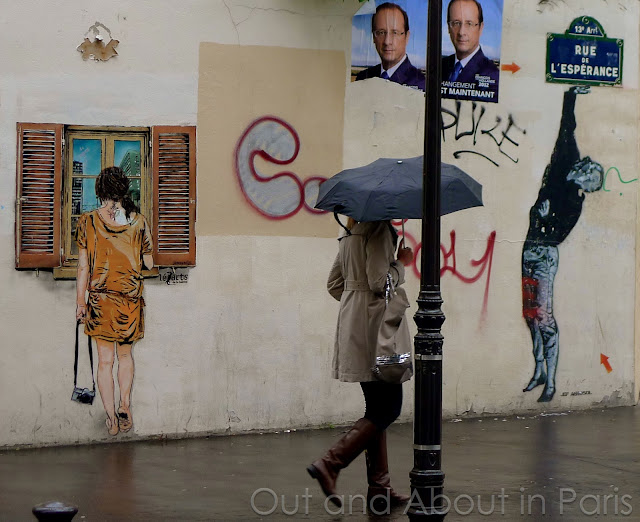 While there are many reasons why I wouldn't make a good tour guide, here are just a few that come immediately to mind:

1. Knowing that Nancy wanted to explore La Butte aux Cailles, a village in the 13th arrondissement, while she was in town, I suggested that we go there rather than the Espace Dali in Montmartre on Monday. As the sky was free of clouds when we made plans early in the morning, I thought it would be the perfect day to be outdoors. Shortly after we emerged from the Place d'Italie metro at 10:30 am, Mother Nature played a nasty trick on me by relentlessly pouring bucket after bucket of water on our heads. I didn't have an umbrella. Nancy did.

2. Scurrying from Les Abeilles, a boutique selling 40 different types of honey, beeswax candles and other products made by bees, to L'Oisive-Thé, a tea salon where women gather to knit and chat over steaming cups of tea, Nancy peered through the windows and remarked that she would try to return later in the week. All of the interesting boutiques that we had wanted to visit were closed. Of course, they were. It was Monday morning in Paris! Naturally, the Espace Dali that Nancy had proposed to visit was open. 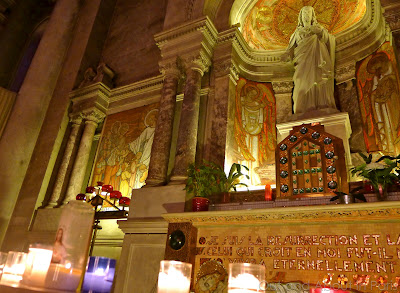 3. Taking refuge in Sainte-Anne-de-la-Butte-aux-Cailles, I spent about ten minutes fiddling around with my camera trying to get some atmospheric shots of the candles in front of the altar while Nancy, a talented photographer, patiently waited for me to finish. Not able to remember what was supposed to be so special about the church, I whipped out my iPhone to look at Patrimap, one of my favorite free apps for information about Paris. After reading a short bit about the history of the church, I reached the part I wanted:

Turning to Nancy, I asked, "Did you see any mosaics? I didn't." Looking around, she pointed to the altar and replied, "They're everywhere." And they really were. Had I not been so focused on the candles, I would have seen them. Dear God, please grant me the gift of sight! 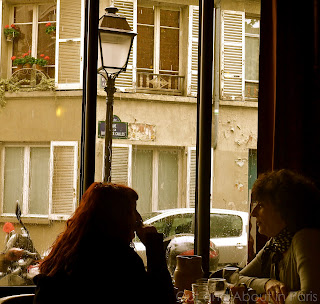 Fortunately, I think that our lunch at Le Temps des Cerises, a co-operative restaurant run by a group of people who take turns doing different jobs, was a success. At least I didn't make the mistake of recommending the rognons de veau (calf kidneys) to Nancy. Watching the rain trickle down the windows and hoping for a respite from the torrential downpour, we gazed out the window like the two women in the above photo.

After visiting Little Alsace, a cluster of 40 timber framed houses that were built for workers on rue Daviel in 1913, not even the rain and faulty umbrellas purchased in haste could spoil the beauty of the wisteria adorning the homes on another quaint street, villa Daviel. Perhaps there is hope for me after all. Tour, anyone? I can't wait to return to La Butte aux Cailles on a sunny day! 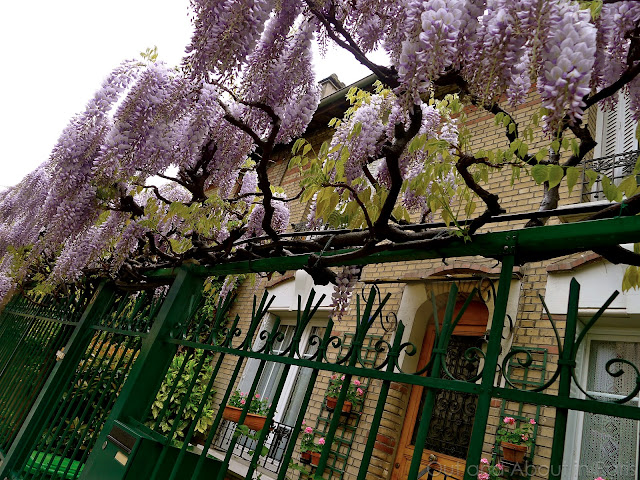