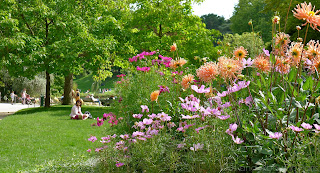 My laptop is a mess and I couldn't sleep last night. While it may seem as if these two relatively common occurrences have little or nothing to do with each other, they both stem from the same problem. I was trying to figure out a way to remember all of the things that I would like to do in Paris during the upcoming months. Rather than spend another long sleepless night reminding myself not to forget this or that, I decided to create a "to do" list.

Tours and activities, most of them free, offered by the parks and gardens of Paris. Depending on the day, you can help with the daily chores at the Paris Farm on April 18, discover the biodiversity in the Luxembourg Gardens on April 11, join a guided tour of the Promenade Plantée on April 27 or learn about the amphibians in Paris at the Parc Floral on April 24. Take a look at the schedule. There really is something for everyone! As all of the activities are in French, there's the added bonus of having a free French comprehension lesson at the same time.

Fountains Night Show at Versaille on Saturdays from June 16 to September 1. From the official website: When night falls the gardens are transformed into a fairytale setting in which groves and ornamental pools come alive with water spouts and colours. This year again, light artists emblazon the gardens with a thousand lights and offer strollers their surprising installations, aquatic effects in the Bassin du Miroir, lasers cutting across the night in the Colonnade Grove and a fireworks display beside the Grand Canal to end the performance. Additionally, there are Musical Fountain Shows every Saturday and Sunday from March 31 to October 28, 2012. 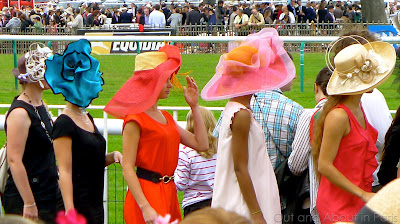 Prix de Diane Horse Race. Even though Sunday horse-races with family friendly activities have already started at the Hippodromes of Longchamp and Auteuil, the main event of the season is the Prix de Diane on June 17 at the Chantilly Hippodrome. In between trying to decide if I should wear the same hat as last year or look for another one, I found myself mentally packing our picnic box with baguettes, foie gras, strawberries and champagne instead of going to sleep last night. Without a doubt, this was one of the highlights of our first year in Paris! Click here to see the hats and here to see the horses.

Firemen's Ball on July 13 and 14. As we were in the United States and missed out on the Bastille Day celebrations last year, I look forward to the revelry in July.

Urban Challenge. Speaking of firemen, I wonder if I'll have the courage to attend one of their fitness sessions this year. Suitable for different fitness levels and offered at numerous parks throughout the city, it's the perfect opportunity to get in shape. The first course is free! If you survive the challenge and wish to take additional classes, a card for 10 classes is 120 €.

17th Century dress-up day and lunch on the lawn at Chateau Vaux le Vicomte on May 20. Stephane and I are disappointed that we'll miss this special event because we'll be in Boston, but we hope to attend one of the Candlelight Evenings when more than 2,000 candles illuminate the gardens every Saturday evening from May 5 to October 6. Fireworks will further enhance the celebrations on the first and third Saturday of the month.

Dinner in White (Diner en blanc) is a flash mob of thousands of elegantly dressed Parisians in white clothes who descend on a famous landmark for dinner. As they reduced the guest list from 14,000 to 8,000 last June, I'm trying to figure out how to get an invitation for this year. Any ideas? The Parisian party has spread to other cities. Take a look at this website to see if there's one near you. 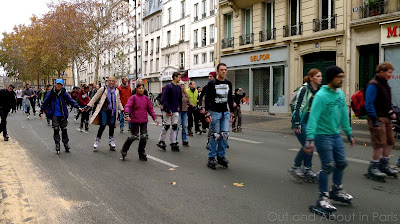 Pari Rollers. Even though I've accidentally stumbled across this group of hundreds of roller bladers who speed through the city streets on Friday nights, I want to go to the starting point at Place Raoul Dautry in the 14th arrondissement to take pictures of them one evening. There's no way that I can join them because they go much too fast for me!

Equestrian Arts Academy within the Royal Stables at Versailles. After not being able to get tickets for any of the equestrian performances or training sessions in December because they were all sold-out, I was pleased to see that there are shows until July.