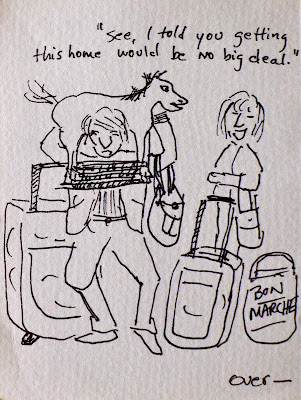 French people don't pack. At least that's what my friends learned when Candy fell in love with a paper mache horse during a recent trip to Saint-Ouen Flea Market. Starting with an asking price of 380 euros, merchant Mme de la Vallee bid an emotional adieu to the former mascot of an equestrian center and wished it bon voyage for 250 euros. What a deal!

Surprised by their unwieldy acquisition and wondering if Candy and Bob were planning to ride the horse back to Ohio, Candy assured me that she had recently used UPS to send purchases from the tiny little town of Oaxaca, Mexico without any hitches. Therefore, it shouldn't be a problem to ship something from an international city like Paris, right?

As Candy's a resourceful woman well-versed in the ways of the world, I had no qualms directing her to the nearest UPS affiliate, Office Depot. Cheerful as always, she waved goodbye and started down the five flights of stairs with the cumbersome horse tucked under her arm. If you're wondering why she didn't take the elevator, imagine squeezing a large paper mache mascot into a space the size of a miniature closet. Without amputation, it's impossible.

Moments later, Candy returned huffing and puffing with the animal. In between trying to catch her breath and answer our questions, she replied that the UPS agents had adamantly refused to pack the horse. Frustrated by the lack of customer service, I called UPS and explained what had happened. After measuring the height, width and breadth of the horse and thinking of the right words to accurately describe it in French, the agent assured us that the Office Depot located on Avenue de Versailles would take care of everything. No problem!

Feeling as apprehensive as a mother sending her child off for the first day of school in a strange land, I waved goodbye to Candy and wished her luck. I really shouldn't have worried though because it wasn't long before she reappeared with...you guessed it...the horse! It turns out that UPS will only ship something after it has been packed. They will not wrap it and box it for you. Neither will Fed Ex. But do you think that the UPS agent could have told Candy before she was forced to hold the horse high above her head to make room for the cheek-to-cheek crowds on the bus during rush hour? No way! The good news is that Candy discovered the key to making Parisians smile. Paper mache horse, anyone?

The last time I saw the animal it was being stuffed, rather indecorously, into the trunk of the taxi bearing Candy and Bob to the Gare du Nord for their trip to London. For some reason, they decided against taking the metro.

Bob, a talented artist, did the above sketch as a memento for Stephane and me. Take a peek inside Bob's travel journal to see what else we did while they were in Paris. It may inspire you to start a journal of your own! 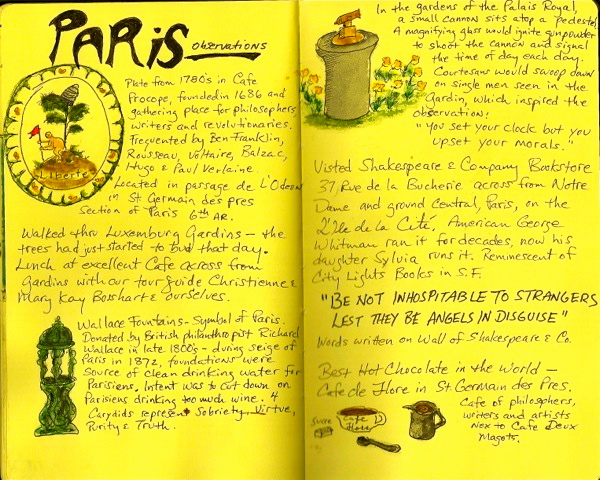